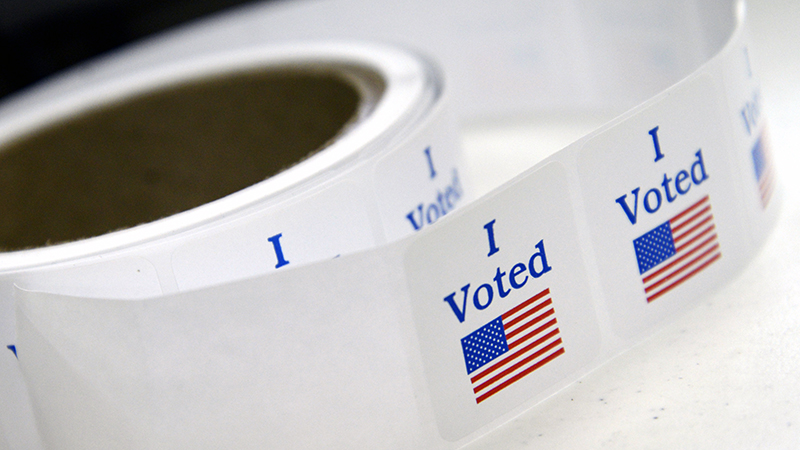 A spool of voting stickers wait to be handed out Tuesday morning at the polling place at the Central Alabama Fairgrounds.

According to the press release, Jackson contacted Alabama Secretary of State John Merrill after receiving reports of “corruption and other fraudulent activities” related to the Aug. 25 election.

“We’ve got these upcoming elections and some things are starting to happen that are getting out of hand,” Jackson said. “In the interest of fairness, I asked Secretary Merrill to send some monitors down to monitor the elections and any fraud they see.”

According to the press release, Merrill “determined that it is in the best interest of the citizens of these municipalities to dispatch election observers,” which will be tasked with reviewing on-site voting actions and the absentee ballot application process, as well as observing absentee ballot counting measures and more.

“The decision to observe the elections in Selma, Marion and Centreville should not be interpreted that Secretary Merrill lacks confidence in the local leadership,” the press release stated. “[H]e simply wants to ensure that every eligible voter is able to cast their ballot for the candidate of their choice in a safe, secure and fair environment with integrity and credibility.”

State election observers are not a new phenomenon in the Black Belt, Jackson said, noting that they were on hand for Selma’s last municipal election.

“Over the years, in Selma and Perry County, there have been a lot of problems with elections,” Jackson said. “That’s been an ongoing problem in the Black Belt.”

Among the complaints Jackson has heard are accounts of an absentee ballot in Marion being notarized after the applicant’s death, as well as Selma candidates living outside of the city limits and using in-town addresses to run for office.

Jackson also noted that the practice of paying for votes, as was done with crack cocaine in a recent Marion election, is also cropping up again in the Queen City and beyond.

“You can’t be offering folks money to vote,” Jackson said. “That’s an issue that happens here in Selma a lot, people being offered money to vote.”

For his part, Jackson doesn’t believe the presence of election monitors will cause wariness among local voters.

“It’s good to have an outside agency investigating this stuff,” Jackson said. “This is the kind of thing they do. Everybody wants a fair election, everybody wants their vote to count.”

And while Jackson’s wife, Selma City Councilwoman Miah Jackson, is currently running for mayor, Michael Jackson asserted that his call to Merrill’s office was made in the interest of ensuring fair elections later this month.