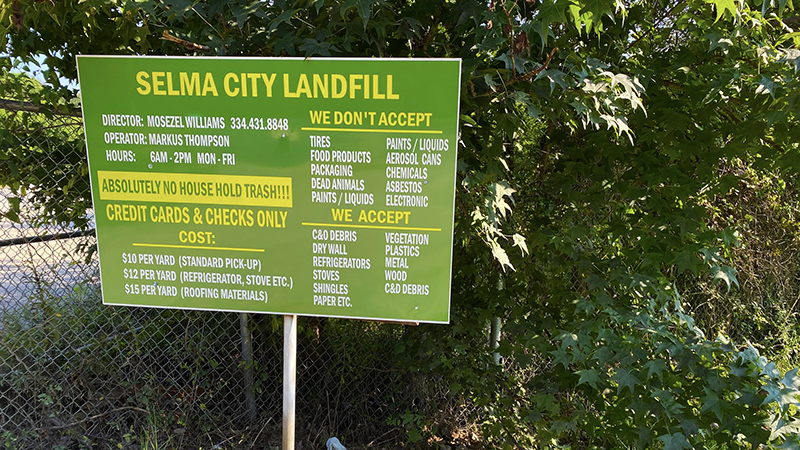 The Selma City Council’s Public Works and General Services Committee held a meeting Wednesday to discuss ongoing issues at the Selma City Landfill on Water Avenue, for which the city has received multiple warnings from the Alabama Department of Environmental Management (ADEM) over a variety of issues.

According to the ADEM consent order addressed to Selma Mayor Darrio Melton on July 23, issues with the city’s landfill date back to December 2017, when the department conducted an inspection and found signs of erosion with exposed waste where cover material was not properly placed per ADEM regulations.

The city was issued a warning in January 2018 and by the end of that month had responded by indicating that “corrective measures had been taken,” but a June 2018 inspection found even more problems – required drainage structures were not in place and pooled water was seen on the site, “significant amounts” of household waste were found at the site – the Selma City Landfill per its permit is only allowed to take “non-putrescible and non-hazardous construction and demolition waste, discarded trees, rubbish and ADEM-approved  waste streams from Global Security Glazing” – no permanent markers denoting active cells, erosion on active cell slopes that left waste exposed, inoperable equipment and more.

The department issued a Notice of Violation (NOV) to the city in September 2018 and three days later performed another inspection only to find another round of problems, some the same and others new – pooled water. Slopes not routed to the sediment basin, household and electronic waste dispersed throughout the area and the presence of flies in the areas where household waste was present, indication that required measures to prevent “the breeding or accumulation of disease vectors” had not been taken.

In October 2018, the department conducted a conference call with Melton to discuss the ongoing issues and by the end of that month the city had claimed to have an action plan for addressing those concerns.

In September 2019, the department again issued a NOV to the city, which responded in November that “violations had been addressed or the facility was in the process of addressing them” – the next day, the department conducted an inspection and found another five infractions.

The end of the consent order notes that the city has been fined $15,775, which must be paid within 45 days of the effective date of the order, for the years of violations and has 30 days to submit a Corrective Action Plan to ADEM.

The majority of Wednesday’s committee meeting centered around purchasing needed equipment for the landfill – according to Landfill Director Mosezel Williams, four pieces of equipment are needed at a total cost of more than $436,000; Williams stated that two, a dump truck for more than $195,000 and a compactor for more than $81,000, were need immediately.

The committee agreed to bring the purchase of the dump truck and the compactor to the council during next week’s work session, as well as a plan to bring five new employees on board to help out at the landfill.