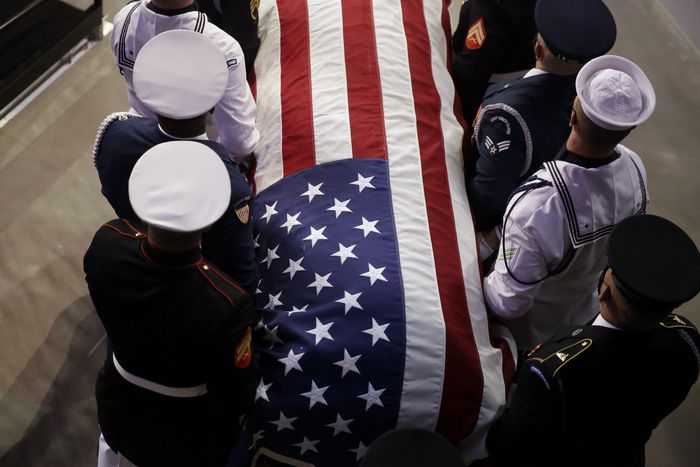 Bouquets of white roses were sandwiched between four Lewis portraits between the pulpit and choir stand to honor the Troy native who fought passionately for Civil rights in 1965, suffering brutal beatings on Bloody Sunday at the Edmund Pettus Bridge.

The middle section of pews was filled with Lewis’ family, who proudly watched a mix of high-profile political figures local and statewide and surviving foot soldiers honor the “Boy from Troy.” After the family was seated, the Armed Forces Casket team brought in Lewis’ casket covered around a red, white and blue American flag.

The local politician closest to Lewis was U.S. Rep. Terri Sewell, D-AL, who called him a mentor, father figure, colleague and friend.

“My memories of John Robert Lewis come through Brown Chapel and Edmund Pettus Bridge,” Sewell said. “John and I had a special bond through Congress and Selma. He was the boy from Troy and I was the girl from Selma.”

“John Lewis meant so much to Selma,” Melton said. “It took the courage of Lewis to bring democracy to this great nation.”

Senator Doug Jones, D-AL praised Lewis for having the courage to overcome adversity during turbulent time in America. Jones said it’s time for the next generation to take leadership as Lewis instructed.

“John gave us our charge,” Jones said. “We must move our feet, our hands, our resources to build and not tear down, to reconcile and not to divide, to love and not to hate, to heal and not too kill. John showed us the way through his courage and love.”

Martin Luther King III said he always admired Lewis for doing the right thing and is now part of a Civil Rights reunion in heaven.

“John is at a reunion on the other side with Dr. Martin Luther King Jr., Coretta Scott King, Ralph Abernathy and Juanita Abernathy,” King said.

Sheyann Webb-Christburg, known as King’s “smallest freedom fighter,” was eight years old during the Civil Rights Movement. She recalled sneaking out of her parents’ home to eventually participate with Lewis, King and other Civil Rights workers at Brown Chapel.

“Being in the midst of them, never did I know it would shape me and embolden me, they had a profound impact on my life,” Webb-Christburg said. “My fellow foot solider, my fellow fighter, my fellow friend.  I often think since his death, do we really realize the magnitude of the loss yet? His voice will be missed and his presence will truly be missed.”

Brown Chapel Pastor Leodis Strong closed the 90-minute ceremony with a strong prayer, urging the next generation “to step into the water” and do the right thing. Strong was also a gracious host pastor and helped The Selma Times-Journal get access to the weekend’s events.

WSFA 12 News Anchor Valorie Lawson presided over the program.  After the program, Lewis’ body was viewed by the public for three hours.