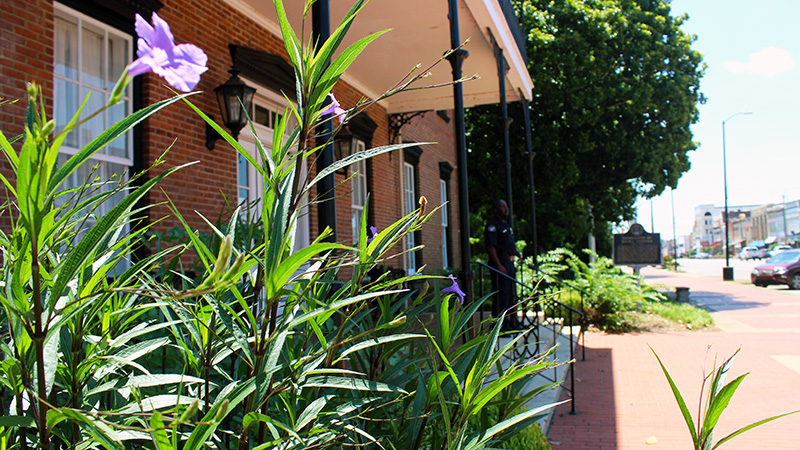 Beneath an oppressive sun Saturday morning, members of the Selma City Council, representatives from the Selma Redevelopment Authority (SRA) and scores of citizens descended on Selma City Hall to kickoff a community-wide cleanup effort.

“It was a wonderful example of collaboration at its best,” said Selma City Councilwoman and SRA board member Susan Youngblood. “We we work together, we broaden our ability to serve the community in a much larger way. That was never so evidenced as it was Saturday.”

The volunteers, which included Snow’s Cleaning Service doing the day’s “heavy lifting,” cleaned up around city hall and along both sides of Broad Street up to the bridge.

Among those on hand was Clay Carmichael, a candidate for the Ward 3 council seat, who cleaned flower beds and picked up trash along Broad Street.

“I’ll always try to be involved downtown, that’s where my heart is,” Carmichael said. “Anytime there’s something going on – a cleanup day or landscpaing or an event or anything else – I’m going to try to be a part of it if I can.”

Selma City Councilwoman and mayoral candidate Miah Jackson was also on hand and organized cold drinks for the workers, as well as an appearance by a local ice cream truck to provide volunteers with a cool treat at the end of the day.

Jackson, who currently represents Ward 3 on the council, canceled her planned canvassing for the afternoon to take part in the beautification effort.

For her part, Youngblood said residents can expect to see similar cleanup efforts in the coming weeks as the SRA focuses on the downtown area.

“There was some hard, hard work done,” Youngblood said. “But this is something you can do just one time.”