Owens taking gospel to the streets of America’s cities 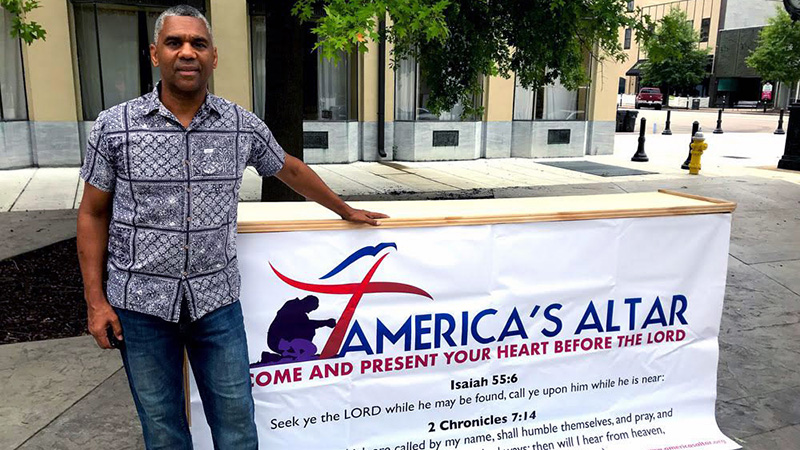 William Owens, a poet and author who last visited the Queen City in January during his march from Montgomery to Selma praying for the nation, will return with his new project, America’s Altar, on July 22 at Memorial Stadium.

Owens said the inspiration for his latest effort struck shortly after leaving Selma and setting himself up in a smalltown Texas church not far from Dallas.

“It started when I was in a little church in Texas,” Owens said. “While I was there, I felt the need to spend some time at the altar.”

For a few nights, Owens prayed there, played his djembe and read poetry, before being called to take the altar to the streets of America.

“I had such an excitement in my heart to do it,” Owens said. “So that became my next agenda, my next mandate, so to speak.”

Owens traveled back to Montgomery en route to Auburn and met with retired Lt. Col. Chuck Carver and the two immediately set to building the altar – an eight-foot wood structure adorned with the America’s Altar insignia across the front.

“I know at this place, at this moment, it was about a non-structured and religious experience of people coming to the altar – not your traditional or expected platform for people to necessarily be preached to, but a place for people to come and pray,” Owens said. “Seventy-percent of the time, it’s just open for people to pray. In between that time, we’re spreading the word.”

The altar was set up in Montgomery over the Fourth of July weekend and will arrive in Selma in less than two weeks, where it will be set up for three days.

“I hope people gain one particular element and that is we come to the realization that we need an intervention of God,” Owens said. “We come to realize that our efforts, no matter how noble, no matter how much we try to rationalize or justify, are all rooted in a perspective that is biased. Many times, that bias is based upon a history that is filled with our fallen nature and, as long as we try to fix, or think we can fix, the issues of the past in our own wisdom, it will never bring healing.”

After its stop in Selma, Owens and America’s Altar will head for Birmingham, then Tupelo, Memphis and Nashville – later in the year, Owens said he and the altar will be set up outside of the Republican and Democratic conventions this year.

“We’ve allowed political efforts to be our go-to and it’s done nothing but divide us,” Owens said, noting that he hopes to see city leaders – elected officials, education leaders and more – spend time at the altar when it touches down in Selma.

“The leaders have been given favor by God,” Owens said. “And when the leader decides to whisper a prayer, the city receives a blessing.”