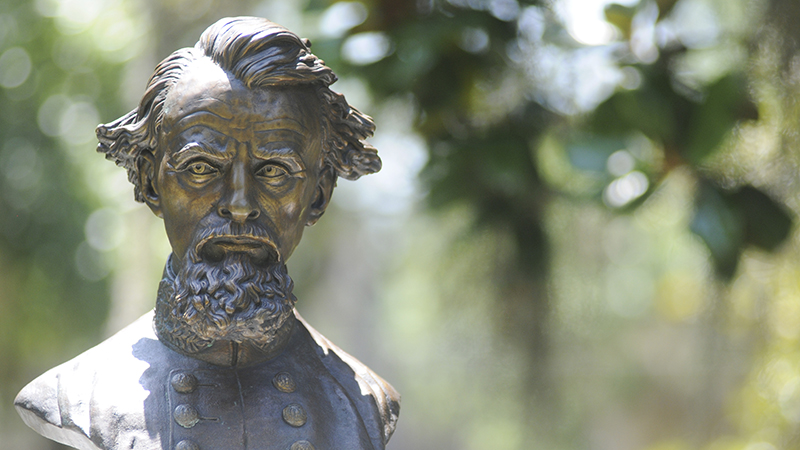 Connor Towne O’Neill, a producer for National Public Radio (NPR) that recently worked on the “White Lies” podcast about the murder of Unitarian Rev. James Reeb in Selma in 1965, was inspired to pen his debut book after a chance encounter with supporters of monuments depicting Confederate General Nathan Bedford Forrest in Selma.

The encounter began a deep dive for O’Neill into “American history and the still-raging battles throughout the South,” according to a press release.

The book, “Down Along With That Devil’s Bones: A Reckoning with Monuments, Memory and the Legacy of White Supremacy,” due out in late September, examines “the legacy of white supremacy…through the lens of conflicts over Forrest monuments in Selma, Murfreesboro, Nashville and Memphis.

In the book, O’Neill talks with Southerners on both sides of the issue and, as a white Northerner who is a recent transplant to the South, currently living in Auburn, comes to terms with his own privilege.

“Encountering Friends of Forrest, a neo-Confederate group, in the spring of 2015 sent me down a rabbit hole of Confederate monuments – the history they tell and the history they obscure,” O’Neill said. “Just two months later, Dylann Roof killed nine African Americans in an attempt to start a race war – so in the ensuing referendum on Confederate symbols, I started reporting on Forrest monuments. His story became the lens through which I came to understand the upheaval in this country in the years since. And this slavetrader Confederate general and Grand Wizard has proved to be a useful lens. The debate about Forrest’s legacy threw into relief what was at stake in everything from police shootings to national anthem protests, white supremacist rallies to immigration debates. By following the battles over his monuments, I’ve seen the whole of American history blowing through, charting an unexpected but revealing account of how we got from Appomattox to Charlottesville – and where we might go next – told in marble, bronze, and brick.”

O’Neill has previously been published in New York magazine, Slate, Village Voice and more and his upcoming release is already receiving praise.

“An eloquent and provocative examination of the links between protests over Confederate monuments in the South and the resurgence of white supremacy…O’Neill writes with grace and genuine curiosity, allowing people on all sides of the issue to speak for themselves,” a review from Publisher’s Weekly said. “This inquiry into the legacy of American slavery is equally distressing and illuminating.”