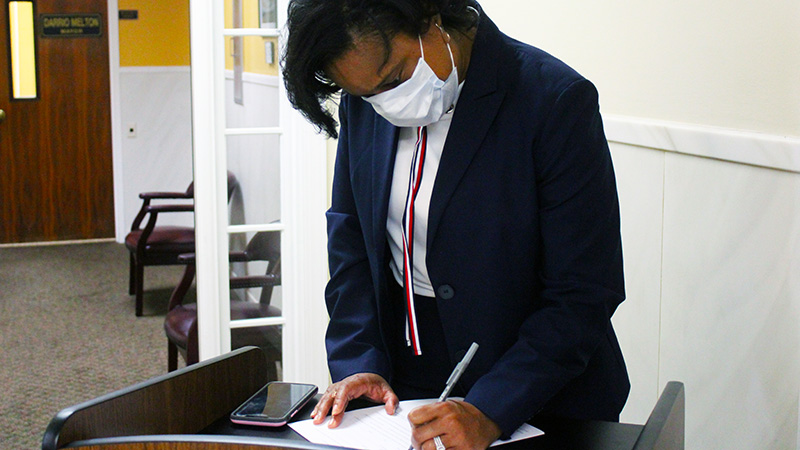 The doors to Selma City Hall were flung open Tuesday morning, following a months-long closure due to the still-raging COVID-19 pandemic, and candidates for a bevy of city offices trickled in to officially qualify to run for the August election.

Along with the municipal paperwork required to run for a local office, candidates must also file paperwork with the Dallas County Probate Judge’s office, to which they will report donations weekly after surpassing a $1,000 threshold, as well as with the Alabama State Ethics Commission.

Further, each candidate must establish an official checking account through a local bank for their respective campaigns.

At city hall on Tuesday, a self-proclaimed “welcoming committee” consisting of Selma City Councilwoman Angela Benjamin and council assistant Carneetie Ellison, who were later joined by Selma City Councilwoman Jannie Thomas, was set up in front of the building distributing hand sanitizer and face masks and handing out cold cups of lemonade.

According to Benjamin, candidates weren’t the only ones looking to do business in city hall on the first day of reopening – Benjamin briefly spoke with a citizen looking to conduct city business, saying later that he was thrilled to see city offices open again.

Candidates met one at a time with Selma City Clerk Ivy Harrison, who went through the paperwork with them to ensure that each page was filled out correctly – the first candidate to qualify Tuesday was Selma City Councilwoman Miah Jackson in her bid for mayor.

Jackson was followed by Stephen Brooks, who’s running against Blackbelt Benefit Group Co-Founder Clay Carmichael for the Ward 3 seat on the council, which is being vacated by Jackson in her bid for the city’s top elected office.

As Brooks met with Harrison and began filling out his paperwork, a handful of other candidates waited in nearby hallways for their opportunity to fill out their qualifying documents.

Robert Wolf Walker, a longtime citizen of Selma and a worker in the city’s Public Buildings Department, is running for the Ward 6 seat on the council, which is currently held by Selma City Councilman John Leashore.

“I see there’s things I can improve and do for the good of Ward 6,” Walker said. “I feel that being a council person, I can be effective in showing what I can do for the City of Selma.”

Walker, who has run for the Ward 6 seat and the council president seat in the past, believes his experience working and living in the city will bode well for his campaign, as well as the fact that he’s widely known and liked in the community.

“I’m pretty familiar and well-known in the City of Selma,” Walker said.

Nearby, Javares Whitely, who will go up against local educator Lesia James for the Ward 4 seat being vacated by Benjamin, waited his turn to file his qualifying papers.

Whitely, a lifelong resident of Ward 4, said the littered streets and roadsides, as well as the overgrown greenery blocking the view of motorists careening through the area, must be addressed.

“We need to come together and get this ward back in order,” Whitely said. “I’ve seen the ups and downs and I think it’s time for some young minds to come in and make a change.”

Having spent eight years in the U.S. Navy, Whitely said he’s up to the challenge.

“I’m ready for the fight,” Whitely said. “I think it’s time to fight for my city.”

Outside on the sidewalk, Bill Tucker, pastor at Trinity Baptist Church in Marion and a former Selma City Council member, discussed his decision to once again throw his hat into the Ward 6 showdown.

“The people in Ward 6 begged me to come back,” Tucker said. “I had no other choice but to run.”