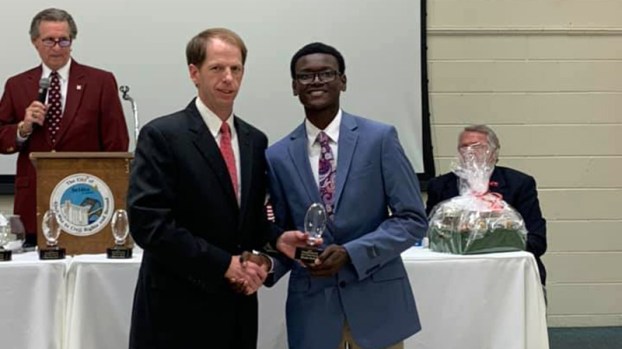 Bryant Gordon, right, receives a scholarship from Bob Frazer at the Selma Quarterback Club. Gordon, a senior at Selma High, will attend Mississippi State in the fall. James Jones|Times-Journal

Gordon, who played football at Selma High, plans to major in Kinesiology and minor in Sports Studies at Mississippi State.

“After graduating college, I want to come back home and help my family and the younger generation,” Gordon said. “My efforts will illustrate to them the right path to being successful in today’s society.  I want to be someone’s role model.  God put me on this earth to do one job and that is to be a good steward and help others in life.”

Harris plans to attend the University of Alabama with ambitions of entering the video game business.

“I am not in a gang, not in jail, not in trouble with the law, not on drugs and thank God, I’m not in the grave,” Harris said. “I am on a journey to overcome crime, poverty and failing schools to accomplish my goals of becoming a software engineer/video game designer.”

Margaret Broadnax is the chairperson of the scholarship committee. Geraldine Morton, Albert Southall and Freeman Waller are on the selection committee.

Keith High School took most of The Selma Times-Journal boys’ individual honors. The Bears took half of the six individual... read more