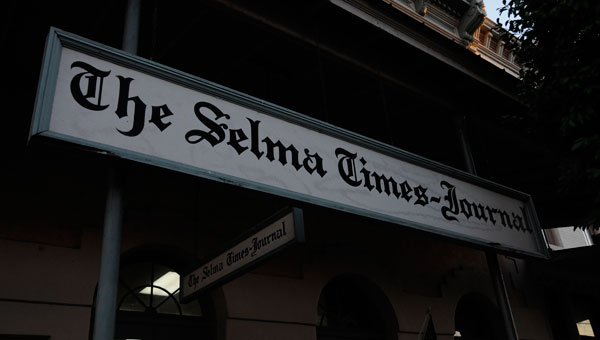 The Alabama Press Association (APA) announced the winners of its 2020 Media Awards Friday via email, having canceled the regularly-scheduled conference due to the ongoing COVID-19 pandemic – The Selma-Times Journal picked up eight awards in the editorial contest and another 14 in the advertising contest.

This year, 98 publications submitted 2,921 entries to the contest, which was judged by members of the Mississippi Press Association (MPA).

The Times-Journal picked up third place honors for Best Editorial Page or Section, finished second for Best Lifestyle/Family Pages and won third place for Best Niche Publication with the 2019 “Salute to Industry” edition.

The newspaper won second place honors for Best Feature Story Coverage with Times-Journal Editor Adam Powell’s series of articles on the history and future of Craig Field, as well as second place for Best News Photo with Powell’s shot of a father hoisting his daughter up during last year’s Bridge Crossing Jubilee.

The Times-Journal won first place for Best News Feature Story with Jones’ article on Kendall Veach, a Morgan Academy graduate who was an All-SEC catcher at Auburn University and drafted to play professional softball

Significantly, the newspaper won first place honors for the Freedom of Information (FOI) – First Amendment Award with Powell’s series of articles, columns, and editorials on the City of Selma’s policy regarding public information, which put access to city documents beyond reach for most people in the city.

Where advertising is concerned, the Times-Journal won second and third place honors for Best Single Ad, half a page or less, in black and white, for STJ Marketing Consultant Bill Tomey’s ads for Harrell’s Refrigeration and Kids Klubhouse, respectively.

The paper took home second place for Best Single Ad, more than half a page and black and white, for STJ Assistant Advertising Director David Lovell’s campaign for Mutual Savings Credit Union and earned second and third place honors for Best Advertising Campaign with a campaign for Rural Health and one for Pilcher McBryde Drug, the latter credited to Lovell.

The Times-Journal won all three top spots in the Online Revenue Builder contest for the Readers’ Choice Winners campaign on Facebook and Yelverton’s Facebook campaigns for Dave’s Market and Breast Cancer Awareness.’’

The paper placed second for the Advertising Sweepstakes Award, which is the top award in the advertising contest.

“We’re certainly pleased that our peers recognized the good and valuable work our advertising salespeople and our reporters produce for our community,” said Times-Journal Publisher Dennis Palmer. “I’m very proud of the work they produce and the fact the Times-Journal was recognized with more than 20 awards should make the people of Selma and Dallas County proud, too. After all, this is your community newspaper, and the support we receive from our readers and advertisers is what allows us to continue to tell the many interesting stories of the people who live here, while also holding those in power accountable for their actions – good and bad.”

Palmer said he was especially pleased with the Freedom of Information award.

“Finishing first place in FOI is a big deal, and one that should be celebrated in our community,” Palmer said. “What that award proves is this newspaper is not afraid to dig deep into an issue that is of great importance to our community, and give readers the facts they need to help us hold the people in power accountable for their actions. Adam and several others in our editorial department have been beating the drum loudly for years about the city’s ridiculously worded public information form and it looks like their work is about to be rewarded with the city’s pending change in the verbiage and the rate taxpayers will be charged for getting the information they seek. I couldn’t be prouder of each one of them and I am honored to work alongside them to produce the best newspaper our community can support.”