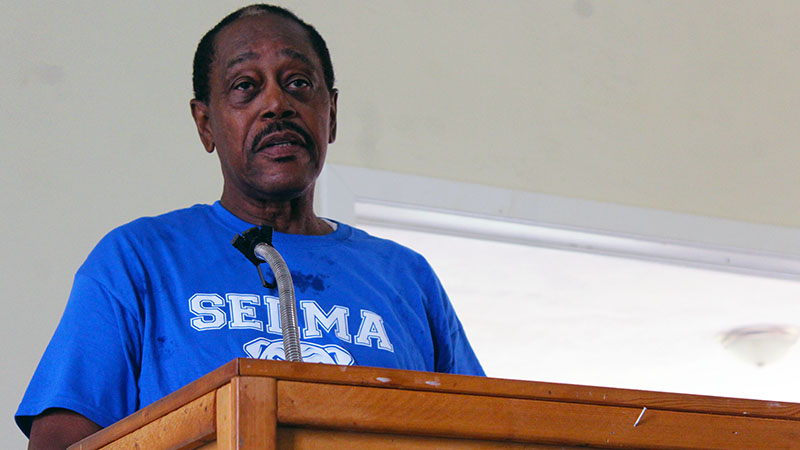 A small group of city and county leaders and supporters, all donning face masks and sitting two to a table, sat down for a breakfast at Selma University Monday courtesy of the university’s new president, Dr. Eddie Hill.

A small spread of biscuits, scrambled eggs, grits, sausage and orange juice were provided to those in attendance, who were described later as all “integral” parts to Hill’s envisioned revival of Selma University.

Duran Odoms, who was described later as working in various capacities at the university, welcomed those in attendance and heralded “A New Beginning” for Selma University, a motto now emblazoned across the back of bright blue shirts with a bulldog logo and Selma University spelled in varsity letters across the front.

The shirts are being sold for $12 a piece.

Thomas, whose ward houses Selma University, addressed the gathering first, offering thanks to Hill and the Selma University staff for putting forth the effort to put the university “back on the map.”

Thomas was followed by Bowie, who called the university’s new motto fitting for the moment.

“Selma University has been a pillar of this community for so long,” Bowie said, adding that Hill could rely on the “full support of the council” in bringing his vision for Selma University to life.

Nunn spoke next and noted that Selma has already lost one college – Concordia College shuttered operations following the Spring 2018 semester – and can’t afford to lose another.

“We don’t need [to lose] another one,” Nunn said. “We need this university to build.”

Likewise, Nunn offered the full support of the Dallas County Commission, noting that the road to revival will require a lot of hard work.

“Success doesn’t come easy,” Nunn said. “It takes work. The only time success comes before work is in the dictionary. You must work hard if you want to be successful. You must work in silence and let your success make the noise.”

Hill was the last to speak and, after thanking everyone for attending the morning’s festivities, reaffirmed his commitment to bringing the university back to life.

“We’re going to make Selma University great,” Hill said. “And we can do it if we work together.”

Hill relented that he has an uphill battle ahead in digging the school out of its current hole, before seeing the school accredited for academics and the basketball team once again playing, but he exuded confidence as he wrapped up the breakfast.

“This didn’t happen overnight and it won’t end overnight,” Hill said. “But we are going to put Selma University back on the map. It’s a new beginning.”