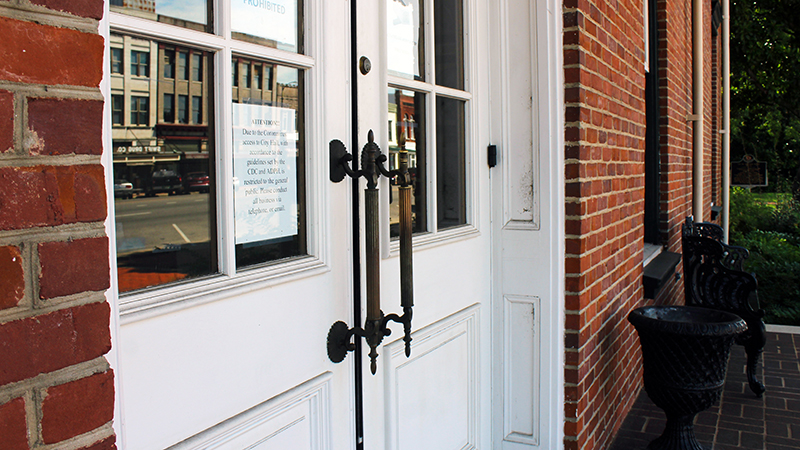 With the July 7 qualifying date just around the corner for local candidates, Selma City Hall remains closed to the public with no signs of reopening on the horizon.

Following a Selma City Council Public Safety Committee meeting on March 16, a “soft” closing of city hall was announced the following day – the front doors of the building have been locked since.

During the most recent meeting of the council, Selma City Attorney Major Madison was asked if Mayor Darrio Melton had any intentions of reopening city hall and replied to the negative.

For her part, Selma City Councilwoman Jannie Thomas said the ongoing closure has thrown a wrench in many of the council’s day-to-day responsibilities, as well as the city business needs of ordinary citizens.

Thomas noted that, despite all city buildings still being closed to the public, employees are still at work in city offices and departments.

“All city buildings are closed but department heads are in there getting paid,” Thomas said. “You got two people in the Welcome Center and nobody can come in. All of our facilities have somebody in there doing something, but they’re not open.”

Additionally, the city has not yet put an election officer in place to assist Selma City Clerk Ivy Harrison, who oversees city elections, despite the budget allocating funds for such a person and the council approving a contract for the employee in January.

“We did approve a contract for [an election officer] back in January,” Bowie said. “The only thing we definitely need to do is set a day for her to come in and get started. We just need to transition her in so she can help with the municipal election, but we have already approved the contract.”

Though Bowie noted that the employee has previous experience with elections, the contracted worker missed election training attended by Harrison in December.

Bowie said he hopes to have the employee in place by July 7, when scores of local candidates will flock to city hall to qualify for the municipal election.

The Alabama Secretary of State’s office was contacted regarding the role of election officers, as well as the requirements for having them trained and in place for municipal elections, but did not respond by press time.

Lori Lein from the Alabama League of Municipalities stated that election officers aren’t required by state law and serve under the city clerk, who acts as the city’s chief elections officer.

Additionally, Bowie noted that the council has to work with Madison in order to appoint poll watchers for each ward ahead of the August election.

“There’s still a lot of work we need to do during this election cycle,” Bowie said.

According to Thomas, the decision to open city hall lies squarely with the mayor, whose quarantine order issued earlier this year is still in effect across the city.

“This city is still under a curfew because he has not released it,” Thomas said. “It’s the mayor’s choice – the mayor of each city in the State of Alabama, they are the ones that can make that decision.”

Thomas is being proactive, however, and has began talking with cleaning crews in order to have city hall deep-cleaned and sanitized ahead of the July 7 qualifying date – both she and Bowie expect that city hall will be opened by then.

“We’re going to have to transition back into city hall for council meetings and the day-to-day business, as well as for candidates to come in to declare their candidacy,” Bowie said. “In the meantime, it’s going to be critical that the council start with a contract to get that building sanitized before it opens to the public and then we’ll have to look at all the other buildings.”

For her part, Thomas believes city hall could be opened up under the same health guidelines and precautions – temperature checks, mandatory masks and gloves, strict social distancing and more – that have allowed the Dallas County Courthouse to reopen to the public.

“It’s kind of hectic the way we’re going through this period with COVID-19, but I think if we sanitize and get somebody to do like they’re doing at the courthouse, I think things will work smooth,” Thomas said. “You have council people that would volunteer to give out the masks, do the sanitizing, do the temperature checks – we could get somebody in there to do the same thing, but it’s the mayor’s call.”