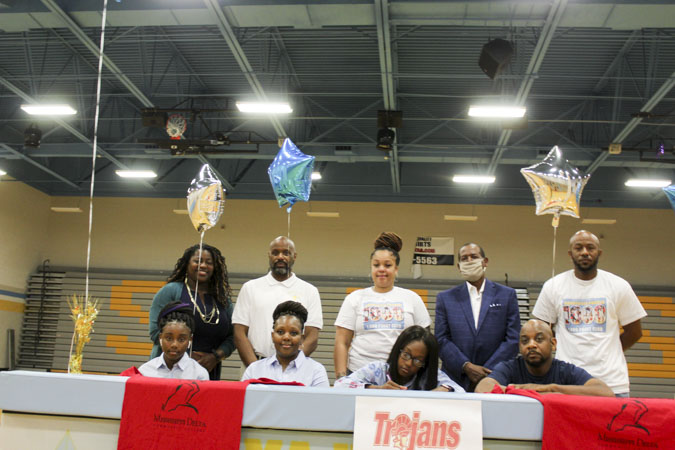 “I want to thank my parents, coaches, teammates, and friends,” Parker said.

“I chose Mississippi Delta Community College because I wanted to get out of Selma,” Parker said.

Selma High basketball coach Wil Morgan said he enjoyed coaching Parker, who scored over 1,000 points in her prep career. Morgan also said one of the reasons he left R.C. Hatch to return home because Parker was on the roster.

“When I became the coach, Parker was a point guard who looked to score first,” Morgan said. “Over the course of the season, Parker became a leader and looked to set up her teammates. She went from being a scoring point guard to an all-around point guard She is a hard worker.”

The 5-foot-6 Parker is part of a 12 player class for the Lady Trojans. She is expected to play the point guard position.

“These young ladies will be a great addition to our family, as we continue to focus on the new era here in Moorhead,” Mississippi Delta women’s coach Tangela Banks said

Parker, who graduates from Selma High on Saturday, leaves behind countless memories in addition to consecutive player of the year awards.

She was 2018 MVP of the Dallas County Schools Holiday Basketball tournament and played in the 2019 Alabama All-Star basketball game.

“Being an All-Star, the Selma Times-Journal player of the year twice and making the All Dallas County team twice,” Parker said.

“Parker’s a gym rat,” Harris said. “She did a great job for four years at Selma High. She can play either shooting guard or point guard and be productive. She was like a daughter to me.”

Parker also received the first Anthony L. Harris scholarship, a $500 amount that will be awarded each year to a Selma High basketball player.