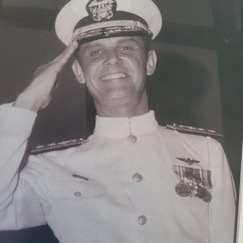 The long and fulfilling life of RADM E.A. Wilkinson (Andy) ended peacefully at home in Perdido Beach,  alongside his beloved wife Sondra and her caring daughter Monica.

Fifteen years ago he and Sondra moved from Northern Virginia to Lower Alabama to an area where he vacationed as a child traveling from his hometown of Selma, with his parents and his cherished sister Martha.

A gentleman, he and Sondra loved their life together in Alabama. They enjoyed golfing, gardening, fishing, and the saltwater life on Soldier Creek They were active members of the Optimist Club of Perdido Bay and the Lillian United Methodist Church and were constantly involved in volunteer activities to help others. On Tuesdays he would read to and tutor students at the Elberta Elementary school, and was affectionately known as “Mr. Andy”. He would always talk about how great it was to see their faces light up when he arrived.

He loved people and made people feel special. He was optimistic, supportive, and complimentary. He developed friendships wherever he went throughout his life.

He is survived by Sondra: her daughter Monica and two sons Mason and Evan, and her son Rex and two sons Travis and Trevor. He is also survived by his three sons, their spouses, and children: Dan and Kate; Andy and Sherry and sons Drew and Nick; and David and Sue and children Daryl and Morgan. When asked what he wanted later in life he said to spend time with his family.

He loved music and would grin when Dan and Drew played guitar and sang. He was an avid golfer and loved to play with Andy and Nick. He loved David’s wit and sense of humor. He always enjoyed getting calls from Daryl and as his only granddaughter felt that Morgan was most special. He loved family gatherings and was always attentive to his daughters in-law Kate, Sherry, and Sue.

He graduated from the Naval Academy in 1955 and shortly thereafter married his first wife Barbara Parker, who passed in 1992. Their oldest son Daryl passed in 1980. Andy was a father figure to Barbara’s younger sister Sandi.

He had a distinguished naval career, earned his Wings of Gold as a Naval Aviator in 1956, and was an Icon in the Patrol Aviation Anti-Submarine Warfare business implementing numerous advances. He possessed a superb intellect and his exceptional people skills and leadership abilities were acknowledged through command of two Patrol Squadrons and two Major Commands; Patrol Wing Five and Commander Patrol Wings Atlantic. His final tour was Director of the Defense Mapping Agency where he was responsible for implementing a Digital Production Solution, an ambitious modernization program which won a national award.

He loved to teach and while in the Navy received an MS in mechanical engineering and taught thermodynamics at the Naval Academy. One of his students was former Dallas Cowboy quarterback Roger Staubach with whom he remained friends. He retired as a flag officer after 34 years serving his country. He loved being a naval officer and was most proud of the strong and enduring friendships he formed within the Navy community that lasted the entirety of his life.

After the Navy he worked at Intergraph Corp for 21 years as an Executive Vice President in their Federal Program.

He lived as a devout and studious Christian. He leaves behind a legacy of love.

Donations in Andy’s memory may be made to the Admiral Andy Wilkinson Memorial Scholarship administered by the Optimist Club of Perdido Bay to annually fund a student participating in the National Flight Academy six-day deployment program located at the Naval Air Station, Pensacola, Florida. Mail to OCPB foundation (PO Box 87, Lillian, Alabama 36549) or donate online at https://secure.qgiv.com/for/aawms

Memorial services will be held in Alabama and the Arlington National Cemetery at a future date once the pandemic subsides.