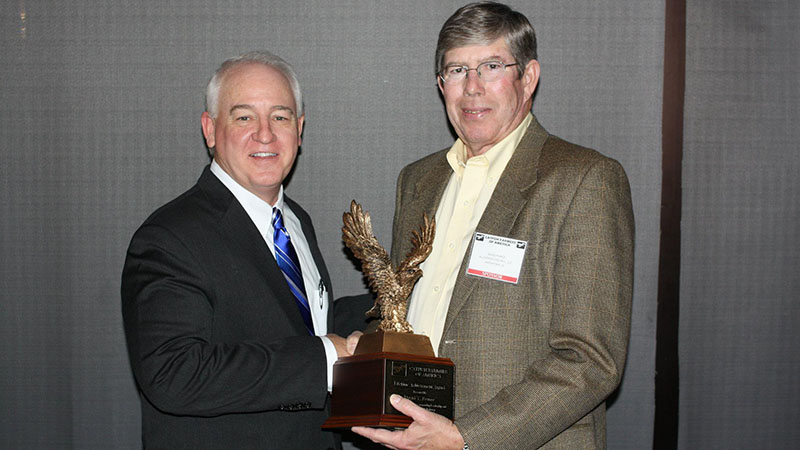 David Yow Pearce is widely known for being an innovator in the catfish industry, and starting a family business nearly 50 years ago that now ranks as one of the largest catfish producing farms in the country.

On May 21, Pearce died at his home in Browns. He was 72. He was laid to rest May 23 at Bell Church Cemetery, located on Pearce Catfish Farm. Pearce is survived by his wife of 49 years, Frances Weissinger Pearce, and sons David Pearce Jr. and Will Pearce, and his twin sister Perry Pearce Benton.

The son of a military officer, Pearce was born at West Point, New York on February 26, 1948 and like many children of military families traveled the world as his family relocated many times in his youth. He earned a degree in business administration from Auburn University, where he was a member of the Sigma Alpha Epsilon fraternity and was an ROTC graduate.

While at Auburn, Pearce met Frances Wessinger and they became college sweethearts. They were married on June 13, 1970. He often referred to his wife as “the Farmer’s daughter.”

Pearce moved to Browns in 1971 with the goal of giving fish farming a try for a year. It didn’t take long for Pearce to become one of the preeminent catfish farmers in the area, and a few years later Pearce Catfish Farm was founded.  The farm was named Farm of Distinction by the Farm-city Committee of Alabama in 1994. He spent days and nights turning the catfish pond into a thriving business that is now run by his sons. The farm has 121 ponds over span 1,374 acres in west Dallas County.

In 1999, Pearce and a dozen other farmers created Alabama Catfish Feed Mill in Uniontown, where he served as President. Pearce realized that feed is one of the farmer’s biggest expenses, so he helped organize other farmers to begin the feed mill cooperative with an investment of $6.2 million.

While Pearce built his stellar reputation through the catfish industry, he served the Dallas County community in many other ways. He served on boards at the Economic Development Board, Chamber of Commerce, People Bank and Trust, Morgan Academy, the Selma Country Club, the Alabama Golf Association, Alabama Senior Golf Association and the Southern Senior Golf Association. He was also very active in his church, Church Street United Methodist, where he was a member of the Guys Sunday School Class.

Pearce’s friends remember him as a wonderful man who loved his family, business, and employees, and was someone they could always count on.

Randy Lovelady was Pearce’s best friend and their friendship began in 1990. They met playing golf and quickly became close friends. He was one of the pallbearers at Pearce’s funeral.

“We were real close, like brothers,” Lovelady said. “We used to travel around playing golf all over the place.”

Ronnie Leet, one of Pearce’s pallbearers, remembered Pearce for his generosity. Leet said they were friends for the last 20 years.

“David Pearce was a real gentleman who was always giving and helping others,” Leet said. “If you had a problem, he’d pick up a phone and would try to help you. He was a person you could depend on.”

Loveland said Pearce’s equal treatment of people was one of his strongest attributes.

“David was the kind of guy that didn’t look down on anybody,” Lovelady said. “He always remembered names of people. He came through the farming industry and was successful, but he always respected his employees. He would give you the shirt off his back.”

Leet said he will always remember Pearce being a wonderful person.

“He was a wonderful person you always wanted to be around,” Leet said. “You could always talk to him about your problems.”

Lovelady said Pearce always a special introduction for him, which he said never got old.

“Pearce always had a saying whenever he introduced me to someone, ‘This is the guy who will go to war with me.’ It was really special for him to think about me this way.”

Part of Dallas County Courthouse closed because of COVID-19