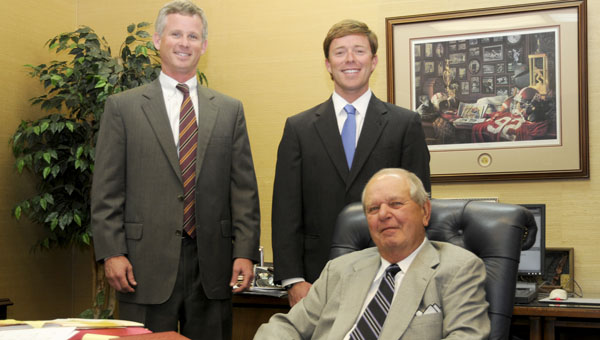 Phillip Henry Pitts, seated, is joined by attorney’s Rick Williams and Tommy Atchison. The Pitts law firm has been a part of Selma since 1891. -- Dennis Palmer

Last Wednesday, Selma’s own Henry Pitts passed away after a lifetime as one of Alabama’s most prominent and storied attorneys.
During his 50 years practicing law, Pitts was involved in many high-profile cases, served as Selma City Attorney from 1982-2000 during Mayor Joe Smitherman’s Administration and even represented NFL Hall of Famer Ken ‘Snake” Stabler as an agent.
Pitts began his storied career in Selma as a fourth-generation attorney in 1963 after earning his law degree from the University of Alabama and subsequently being admitted to the Alabama Bar association.
Pitts’ legacy lives on at the firm his ancestors began in 1891, now Pitts, Williams and Jones, led by Pitts’ close associates Rick Williams and Tommy Jones.
In the wake of their friend and colleague’s passing both men reflected on the lessons they learned from the late attorney and Pitts’ lasting legacy.
For both Williams and Jones, their relationship with Pitts goes back to when they were both youngsters growing up in Selma.
“I’ve known Henry for as long as I can remember,” said Williams. “He’s an old family friend.”
Williams first worked for Pitts during a couple of summers during law school, and once he finished his education in law, he returned to Selma and took a job at Pitts’ firm.
Jones’ relationship with Pitts began as a caddy.
Right before a golf tournament, Pitts had sustained an ankle injury and was allowed to play out his 18 holes by golf cart, rather than have to walk.
“He didn’t need me to carry his bag,” said Jones. “But Henry, being kind and generous as Henry always was, let me drive the cart and then he payed me anyway.”
Pitts was also responsible for organizing the Ken Stabler Football camp in Selma which Jones shared fond memories of.
Jones recalled spending time with Stabler and other player from the Los Angles Raiders including defensive lineman Otis Sistrunk.
“He was the biggest man I think I’ve ever seen,” said Jones. “His hands were the size of two normal man’s hands.”
When Jones first came to work for Pitts right after law School, Pitts brought him along to negotiate Stabler’s final contract with the New Orleans Saints.
“I was allowed to sit in there while they negotiated this contract,” said Jones. “Of course I didn’t say a word, but that type of experience.. those were the type of experiences that endeared me so much to Henry.”
Jones not only spoke of Henry’s generosity, but his talent as a lawyer as well.
Jones said he’s in the unique position of practicing law with Pitts, against him and also serving as the circuit court judge where Pitts practiced law in front of him.
“He was fully confident, he took no prisoners and he was extremely ethical,” said Jones. “As a circuit judge being before me, he never took advantage of our friendship.”
Jones said Pitts was a gifted trail lawyer.
“Being a trial lawyer isn’t something you can just learn,” said Jones. “You’ve either got it or you don’t and Henry had it.”
“Henry was a great trial lawyer, he was really good on his feet and really had a knack for trying cases and handling witnesses. Juries always seemed to like him, he could always add some humor to trials. But he was a hard nosed, old-school trail lawyer. He tried more cases than anybody in this area that I know of,” added Williams.
Williams said what Pitts’ clients appreciated about him was his commitment, no matter the size of the case.
“He really worked just as hard on every case and fought hard for the client,” he said. “It might be people fussing about something relatively small in nature or it may be a catastrophic injury type case, but Henry worked just as hard during either situation because he knew it was important to the clients.”
After spending his entire career with Pitts, Williams said he’s learned quite a bit from the veteran attorney over the years.
“Henry used to love to talk about the three ‘p’s’. You have to prepare the facts, you have to prepare the witnesses and you have to prepare the law. I think he learned that from his dad and what I learned through it is there’s no substitute for hard work,” he said. “It doesn’t matter how smart you are or how talented you are, you have t be prepared and you have to work hard. There’s no substitute for that.”
“My daddy always used to say, law is a jealous mistress and that’s true,” Pitts told the Times-Journal in a 2011 interview. “You can’t practice law halfway. You practice law all the way or you don’t do it.”
Williams said Pitt’s larger-than-life personality went beyond the office and into his personal life as well.
“He could command a room weather he was telling a story or trying a case, he had a gift for that,” he said. “He just lived life to the fullest.”