Ivey signs state budgets after tiff with legislature over funding 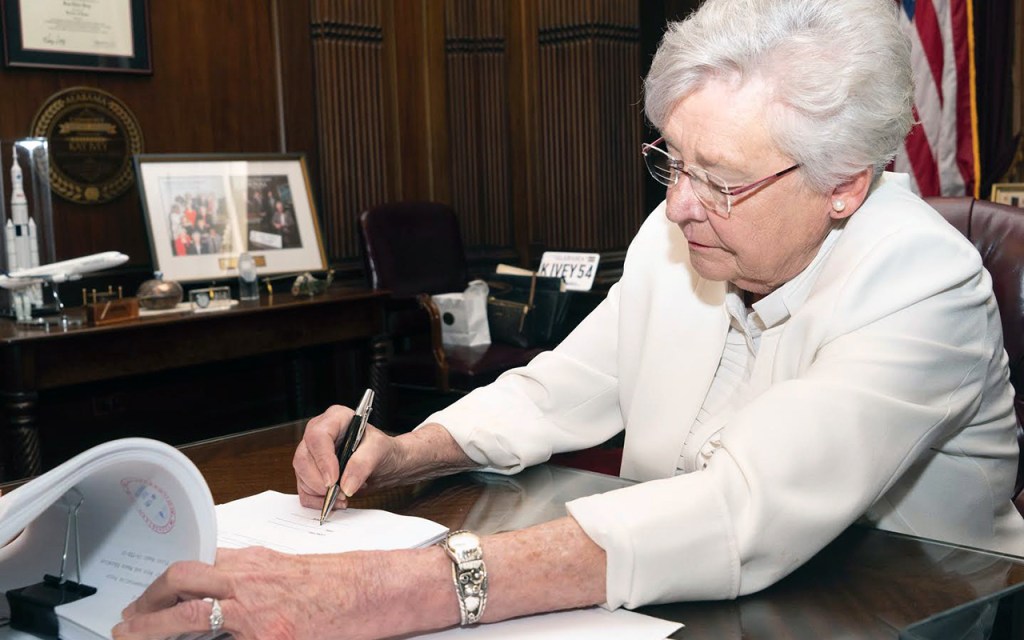 After a week marred by contention between Alabama Gov. Kay Ivey and Republican leaders in the Alabama Legislature over plans to spend the nearly $2 billion slated to come to the state via the federal Coronavirus Aid, Relief and Economic Security (CARES) Act, state leaders reached an agreement Monday.

The beef between the governor and the legislature kicked off when Alabama Senate Pro Tem Del Marsh, R-Anniston, and other Republican lawmakers announced that they were considering spending $200 million of CARES Act funding, which was meant to provide relief from the worst economic effects of the COVID-19 pandemic, on the construction of a new statehouse.

Ivey blasted the proposal, as did Alabama’s Democratic members of Congress, and late last week issued a statement detailing how she would like to see the relief funds utilized via an amendment to the previously-approved General Fund budget, SB161.

In her executive amendment to the legislature’s General Fund budget, Ivey included the following recommendations:

“This is by no means a perfect compromise, however, we are pleased that the governor has acknowledged that the legislature has control of funding, as per the Constitution,” the statement said. “Ultimately, we gave our support to the governor’s Executive Amendment, as it is the best deal for the people of Alabama. We understand that it is imperative to start getting CARES Act money as soon as possible to those who are most in need and sending this money back to the federal government would not be in the best interest of Alabama. At the end of the day, this is a win for the legislature, a win for the Constitution and a win for transparency when it comes to the distribution of funds.”

Likewise, Ivey was enthused by the funding accord the two sides finally reached.

“I commend the Alabama Legislature for their cooperation by supporting my Executive Amendment to SB161,” Ivey said in a statement Monday. “This friendly amendment ensures the CARES Act money will be immediately available to the people of Alabama and put to use under the intent of the U.S. Congress and President Trump. Our cities, counties and state, as well as places like our nursing homes, hospitals, schools and colleges have incurred many legitimate expenses because of COVID-19. I thank the members of the Alabama Legislature for supporting this amendment and for ensuring this money helps the people of Alabama who have been harmed by this disease. While no one could have predicted COVID-19, it is easy to conclude this pandemic has touched every aspect of our daily lives. I assure the people of Alabama that we will be with them at every step moving forward. Together, we will recover, and we will get Alabama back on her feet.”

Ivey signed both the General Fund and Education Trust Fund budgets into law later that day, again taking time to offer thanks to state lawmakers for working through her funding concerns.

“I appreciate the hard work of the legislature during an unprecedented regular session,” Ivey said in a statement released Monday afternoon. “While we have yet to know the full impact of COVID-19 on our state, these budgets will ensure continuity of government, while being fiscally responsible. There is more work to be done and I look forward to working with the legislature in the days ahead.”