Dance instructor gets creative amid crisis 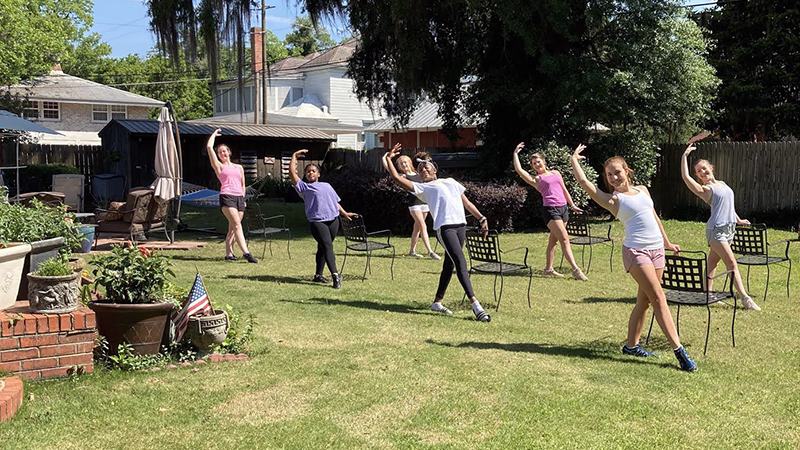 Margie Burk has owned Studio 4, Margie’s Dance Center, for 41 years where she has made a career teaching the young women of Selma and Dallas County the joys of dance.
“I don’t know how people can stand still when they hear good music,” said Burk. “I tell my children all the time it’s not about listening, it’s about feeling what you hear. That’s what you want to express when you dance. Your feelings. You aren’t just making movements.”
While the pandemic caused by COVID-19 caused Burk to close the doors to her studio, her commitment to her student has persisted, inspiring the dance instructor to find creative ways to keep her student connected to one another and to the art of dance.
Online video classes for all age groups uploaded via Facebook.
Around Easter, Burk began uploading instructional videos to Facebook for her student of all ages.
“We went with [Facebook] in lieu of Zoom because of the convenience and availability,” she said. “It gives children the opportunity to watch them as often as they like and at their convenience or their parent’s convenience for the little ones.”
Burk said she’s gotten plenty of texts and Facebook messages from the parents of her younger students telling her that their children are watching the videos four or five times a day.
“I said, ‘I may end up with the best dancers ever after this is over because the kids are practicing so much,’” said Burk. “It makes me feel so good that they share my passion.”
For her older students, Burk has been able to continue conducting classes in her own back yard, appropriately dubbing the classes “Backyard Ballet”.
These older students, Studio 4’s Senior Company, consist of students who had to audition for the company and were judged and scored by a committee unaffiliated with the studio.
“Many of them have been with me since they were small,” said Burke. “They’re all totally committed, beautiful young women. Both inside and out.”
As restrictions have eased, Burke is now allowing her Senior Company into the studio, provided they wear protective masks, use hand sanitizer, socially distance and bring only their shoes into the studio.
While feedback from both her students and their parents has been positive, Burke said continuing to provide her students with instruction hasn’t always been easy.
In an attempt to upload the initial instructional video at her home, Burk waited a full 24 hours for the 15-minute video to upload, only to have it not upload at all.
She tried again at the studio, where it took a few hours.
Finally, Burke had her husband drive her around Selma, all the while staring at the bars on her phone for the strongest signal.
She finally found it in front of the Selma – Dallas County Public Library and was able to upload the video in a matter of minutes.
While Burke has been steadily uploading videos to keep her students in practice, the studio’s annual recital had to be put off.
Traditionally held the first weekend in May, the recital features set pieces, costumers, props makeup and all the other things associated with a theater production.
“We make it as professional as possible for the kids,” said Burk.
Since the recital wasn’t possible under the current circumstances, Burk and her studio helpers decorated the space in honor of the hard work all of her student have put into the program since August.
Clusters of colorful balloons were tied to the guardrails in front of the studio’s front door in honor of the younger students.
At night, the older students were honored by with life-size, lite-up ballerina’s in the studio’s front windows and projected dancing hearts across the front door.
On the studio’s lawn, signs were placed with encouraging messages from Burk to her students were on prominent display.
“They’ve worked for this since August and along with everything else that’s going on, the kids are being disappointed and I just couldn’t accept that,” said Burke. “I didn’t want these kids to be dropped from something they enjoyed.”
Before the outbreak, Burk was given a letter from the mother of one of her Senior Company Dancers that illustrates perfectly what she wants for her students, illustrating why she’s worked so diligently to keep them connected.
“I got a beautiful note from one of my moms, thanking me for helping her child mature and to present herself as a young woman in a graceful and gracious way,” said Burk. “They felt like that was done partially because of the way she learned to carry herself, the way she learned to communicate and relate to others and that really made me feel good. When a mom feels that way, you know it’s genuine because their children are their prized possessions. They want what’s best for their kids. I want what’s best for their kids because their kind of my kids too.”