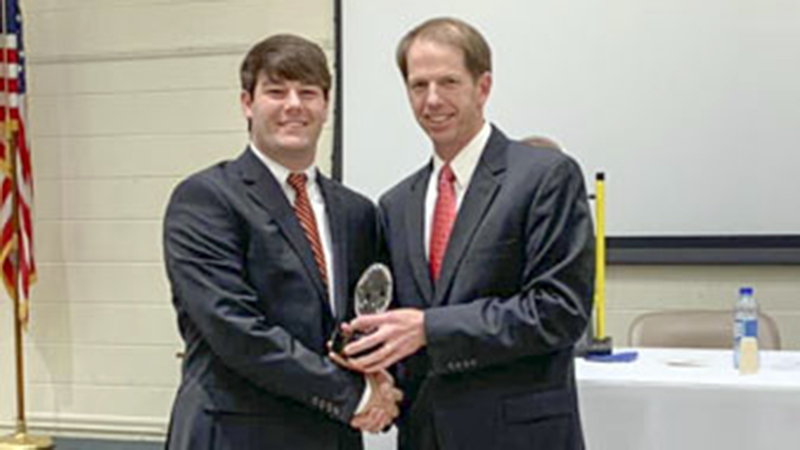 Will Ingram of Morgan Academy receives a scholarship from Bob Frazer of the Selma Quarterback Club. James Jones|Times-Journal

Will Ingram wasn’t finished completing his scrapbook at Morgan Academy.

“We are a close group, we began at Morgan Academy in kindergarten,” Ingram said. It’s hard not to see everyone’s faces everyday. We had fun, talked and sat during lunch period. It’s hard to think that the school year is over.”

Ingram said if the COVID-19 pandemic hadn’t hit, Morgan Academy may have enjoyed a historic season in boys soccer.

“It would’ve been our best-ever soccer team at Morgan Academy,” Ingram said. “We all worked really hard. All of a sudden, soccer season was gone. When we beat Escambia Academy, things were heating up for us. I told the players before our last game to appreciate the games we played because this might be it. Having the season end on Friday the 13th was very weird.”

Ingram was best known at Morgan Academy for his stellar football career. He made The Selma Times-Journal All Dallas team for the last two seasons and played in the AISA All-Star football game. He received a $5,000 scholarship from the Selma QB Club.

“Coach Thacker pushed me to do my best and taught us how to be men,” Ingram said. “I appreciated that. It made everyone on the football team tougher.”

Ingram is an honor student at Morgan Academy. He has a 4.1 GPA and made 30 on the ACT.

After graduation, Ingram plans to attend Auburn University during the fall and major in Agricultural Economics.

Simmons ready to line up and shine for Chicago…