Ivey: No change yet to current order 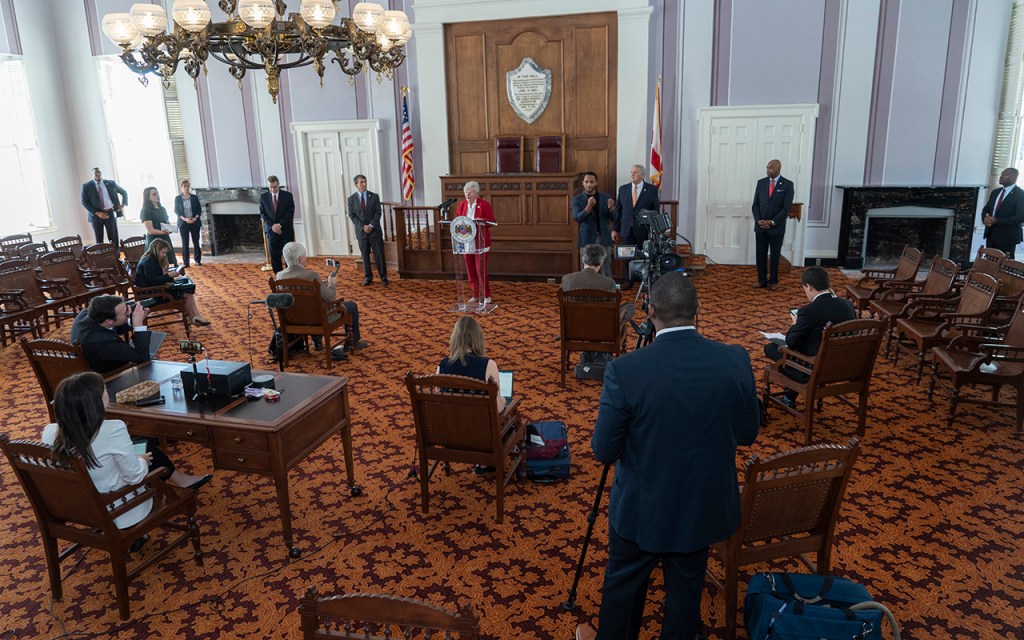 Governor Kay Ivey held a Press Conference to give an update on the Coronavirus Tuesday April 21, 2020 in Montgomery, Ala. (Governor's Office/Hal Yeager)

Alabama Gov. Kay Ivey announced during a press conference Tuesday, before a small gathering of reporters at the capitol and a larger audience of Alabamians watching online, that the current “stay-at-home” order would remain in place until its April 30 expiration date, but she and other state leaders would continue looking at ways to reopen the state’s economy in the coming weeks.

Ivey noted that this week marks the disease’s projected peak in Alabama, adding that she looks forward to seeing the numbers decline and the state making progress on getting the economy up and running again.

Ivey said her office, along with the various committees and officials involved in drafting a plan for reopening the state, have pivoted to focus on the state’s economic health along with the health of its people.

“In my mind, those two have been interwoven since the very beginning,” Ivey said.

The governor noted that, even though no restrictions are so far being loosened, the Executive Committee of her Coronavirus Task Force is working to draft a plan, built upon recommendations from health officials, state and federal lawmakers and more, to reopen the state’s economy safely.

“We can do this and we will do this,” Ivey said. “I’m as eager as anybody to get our economy open, spinning on all cylinders again, but, again, we have to be careful and cautious in what we’re doing and do it in a smart, productive way.”

“This program is absolutely critical to our people, especially our small businesses,” Ivey said.

Alabama State Health Officer Dr. Scott Harris provided a snapshot of Alabama’s COVID-19 cases – as of Tuesday afternoon, there were more than 5,100 cases in the state, 28 in Dallas County, and nearly 170 deaths – but said that the expected hospital surged had been contained.

Harris noted recommendations issued last week by the White House about reopening, all of which Alabama is on target to meet – the guidelines recommend that hospitals be working within normal capacity, which the state’s are, that state’s track symptom trends, which Alabama has with data looking good over the last two weeks, and that cases be declining over a two week period, which the state has not yet seen.