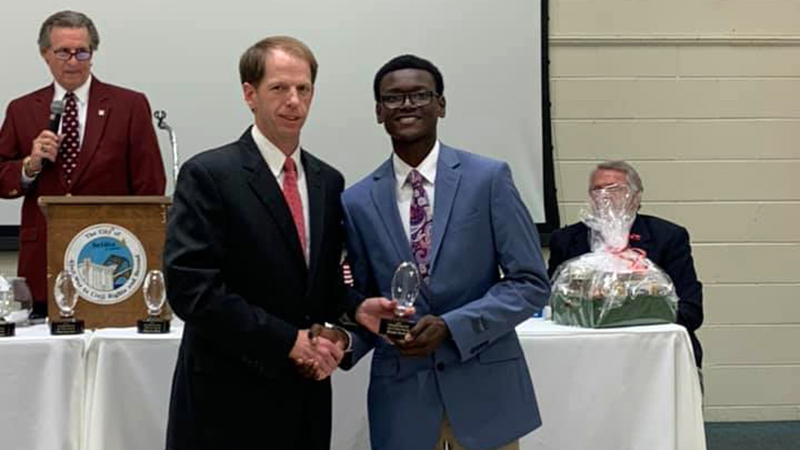 Bryant Gordon, right, receives a scholarship from Bob Frazer at the Selma Quarterback Club. Gordon, a senior at Selma High, will attend Mississippi State in the fall. James Jones|Times-Journal

Bryant Gordon is wearing many hats during his senior year.

Gordon attends Selma High School and is in the dual enrollment program at Wallace Community College-Selma. He’s a successful honor student at both schools and also played on the Saints’ football team.

Next month, Gordon will graduate with an Associates’ Degree at WCCS. At WCCS, Gordon has a 3.7 GPA.

At Selma High, Gordon has a 4.07 GPA. He admits that it’s a juggling act, especially with online classes.

“It’s tough, but I’m pulling through,” Gordon said. “I was a little discouraged about the school closing and not seeing my friends. I’m leaving it up to God. I was already taking online classes at WCCS.”

Gordon has earned two accolades during a hectic senior year. He received a $5,000 scholarship from the Selma Quarterback Club in November. Gordon also attended the Delta Sigma Theta Cotillion and received a certificate of appreciation.

During the fall, Gordon will attend Mississippi State and major in Kinesiology and minor in Sports Studies. Gordon said he’s looking forward to attending MSU, an SEC school based in Starkville, Mississippi.

Gordon, a member of the National Society of High School Scholars (NSHSS), said he will take several memories of Selma High with him to Starkville.

“My biggest memories at Selma High School are playing football and setting a good example for other students,” Gordon said.