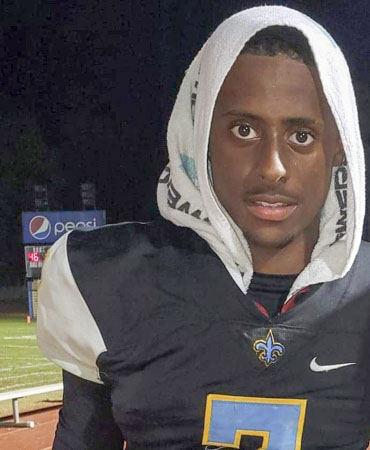 Jacksonville State University has extended an offer to Nelson, who will be a senior for the Saints next season.

The Gamecocks compete in the Football Championship Subdivision (FCS), formerly known as NCAA Division I-AA. JSU consistently makes the FCS playoffs. The JSU campus is a three-hour drive from Selma.

“It feels great to receive a D-I offer, but there are about to be many more offers rolling in soon,” Nelson said. “Jacksonville State is my only offer, but I have a lot of interest from schools.”

Selma High football coach Willie Gandy said he’s proud of Nelson getting off to a great start in recruiting.

“I’m extremely happy for Dion to receive his first offer,” Gandy said. “No doubt in my mind that this is only the first of many offers Dion will receive. He’s really a smart and hardworking kid.”

At six-foot-four and 210 pounds, Nelson has the size and skillset to play wide receiver on Saturdays.

Nelson has met NCAA freshman eligibility requirements in 2021. He has a 3.0 GPA and scored 19 on the ACT.

“He’s already a qualifier for college so that make things easier for him and the schools that’s recruiting him,” Gandy said.