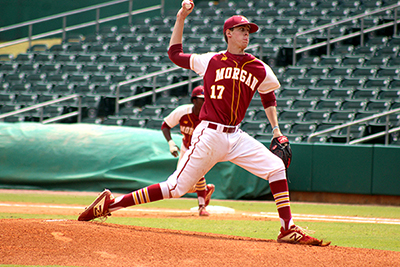 Pitcher Matthew Davis had visions of concluding his Morgan Academy baseball career on a winning note.

The COVID-19 pandemic has forced Gov. Kay Ivey to close K-12 schools statewide for the rest of the year and forced schools to teach online.

The AISA has suspended spring sports until April 17, leaving the door open for baseball, track, softball, tennis and golf seasons to resume.

“I was looking forward to having a good senior year and finishing high school,” Davis said. “But you can’t control what’s out there. I’m not upset, just disappointed that I may have played my last high school baseball game.”

Davis, who made The Selma Times-Journal All Dallas County baseball team and AISA All-State last year, said he misses being around his teammates and classmates.

“Growing up and playing with the same group of guys, you form a bond and you get close,” Davis said. “I loved being around my friends everyday. I miss that.”

Davis said he can’t wait to play at Arkansas Little Rock. He signed a national letter of intent during the NCAA Fall Signing Period in November.

“I’m so excited to go there,” Davis said. “I feel that it will be a good experience for me. I feel good about their high expectations of me.”

UALR recruiting coordinator Noah Sanders praised the skillset of Davis, who had 51 strikeouts and a 1.64 ERA in 42.2 innings pitched.

“Matthew is a tall right hander with a high 3/4 arm action and a fastball that has been into the low 90s,” Sanders said. “He also possesses a sharp slider that he can throw for a strike in any count. We believe his skill set, along with experience in big games, will allow him to come in a serve a huge role right away in 2021.”

“He’s a great kid that has worked hard to get where he is,” Clements said. “UALR is not only getting a great player but getting a great young man. I know God has big plans for Matthew and I cannot wait to watch them unfold.”