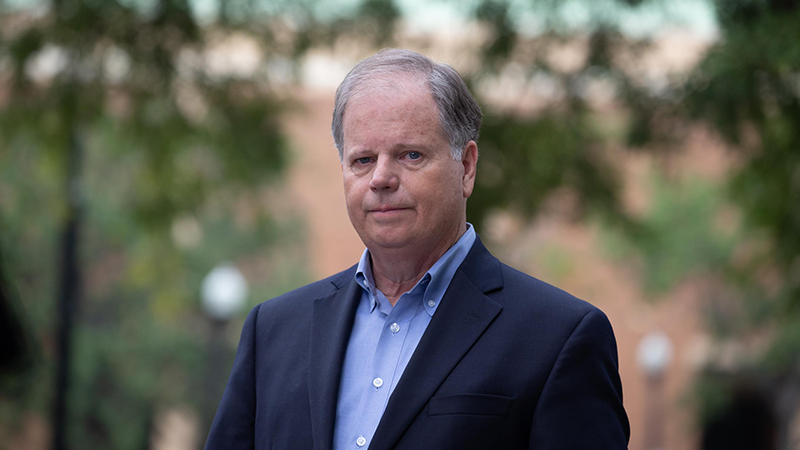 The U.S. Senate has, thus far, passed three COVID-19 relief bills to the house and finally U.S. President Donald Trump with the third being enacted on Friday, March 27.
“The first two [packages] were geared a lot more toward healthcare equipment, those kinds of things, as well as nutrition programs for kids and nutrition programs for the elderly,” said U.S. Sen. Doug Jones, D-AL, in an interview with the Selma Times-Journal. “Those were the main focuses of the first two packages. It’s really the third package, what we call COVID III, that really impacts most people in a much bigger way in any number of possible ways.”
Jones cited several provisions within the third bill, “COVID III”, that will benefit Alabamians, specifically those in rural, impoverished areas like Dallas County and the rest of the Black Belt among them: direct payments to people who make $75,000 per year or less and those who receive social security; the expansion of unemployment compensation to four months with and additional $600 per month from the federal government which Jones called “pretty significant”; Small Business Administration (SBA) grants offering reimbursements in expenses for small business owners who keep employees on their pay roll.
In addition to the aforementioned provisions Jones said would help Alabamians on an individual level, Jones also pointed to legislation within the bill that will affect Alabamians on a broader level such as a $133 billion toward healthcare, hospitals and community health centers; the expansion of funding for community health center through the fall; and $150 billion in funding that will go to states which they will distribute among local governments to assist with virus related expenses.
“Those are the highlights I think, of all of this,” said Jones. “
Jones said that the original bill introduced by U.S. Senate Majority Leader Mitch McConnell did not include enough money for hospitals, additional unemployment compensation or the SBA grants.
“Democrats worked to make the bill more worker friendly, resulting in a ‘workers and healthcare first’ bill,” said Jones.
The Senator said there were many unknowns to consider as the U.S. Senate considers further legislation.
“We don’t know how long this crisis is going to last. We don’t if we’re going to have to do another round of unemployment compensation. We don’t know if we’re going to have to do another round of direct checks. We don’t know if we’ve gotten enough money for small businesses,” said Jones. “It’s a work in progress and we’ll see how it goes.”
Jones listed a few additional provisions he believes should be included in future legislation, the first being a legislated extra period of open enrollment for citizens to register for health insurance.
“There’s a lot of people that don’t have insurance but all of a sudden they think they should get it,” said Jones. “we want to make it easier for them to get it.”
Second, Jones called for additional funding to help local governments recover from lost revenue, which he said were inevitable.
“We know they’re going to have lost revenues,” said Jones. “I want to make sure they don’t go any further in the hole than they have to.”
Finally, even during the pandemic, Jones has been advocating for the expansion of Medicaid, which he says would get around 340,000 Alabamians healthcare coverage immediately.
“There are going to be some tweaks to the legislation as this thing plays out and we’ll see how it operates,” said the Senator. “We did this in a bipartisan way pretty quickly, but it’s not a perfect bill and we know that. There’s going to have to be some tweaks and changes going forward as we hear from people across the country.”
Hours before Gov. Kay Ivey declared a state-wide Stay at Home Order on Friday evening, Jones expressed concern with state leadership to do just that.
“I really wish leadership in Montgomery would be more forceful in issuing orders that would mandate people stay at home, with exceptions for essential services, I really think that’s important,” said the Senator. “Leadership in Montgomery is mixing messages with how it’s important to stay at home and social distance and how we’re trying to keep the economy alive. People get those mixed messages and they tend to go out and do things when they shouldn’t… The governors of Georgia, Tennessee, Florida and Mississippi have all [enacted Shelter in Place orders]. Everybody. It’s kind of like the damn lottery now. Everybody’s got the lottery except Alabama. We are now completely surrounded by southeastern states that have these orders and it needs to come down. I don’t know why Alabama always has to be the last to do something.”