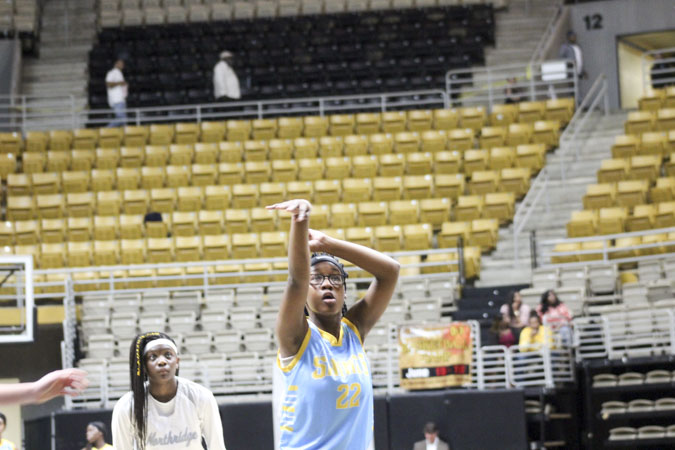 Parker earned The Selma Times-Journal’s girls’ basketball player of the year for a second straight season.

The 5-foot-5 Parker averaged 20 points a game during a stellar senior campaign, which the Lady Saints (18-7) reached the Class 6A Southwest Regional Finals.

For all of Parker’s amazing accomplishments, repeating as player of the year was something she didn’t envision.

Parker, though, has a few regrets.

“I had a good senior year, but we didn’t go as far in the state playoffs as I’d liked for us to,” Parker said.

Parker successfully adjusted to the coaching transition from Anthony Harris to Willie Morgan.

“It was an adjustment because I played for Coach Harris since eighth grade,” Parker said. “It took a while. I got better and better each year I played at Selma.”

“Parker’s a gym rat and loves the game of basketball,” Morgan said.

Morgan, a former R.C. Hatch Basketball coach, said he enjoyed watching Parker evolve into one of the state’s top guards.

“When I became the coach, Parker was a point guard who looked to score first,” Morgan said. “Over the course of the season, Parker became a leader and looked to set up her teammates. She went from being a scoring point guard to an all-around point guard. If I had another year to coach Parker, she’d be awesome.”

Parker said she enjoyed the leadership role and setting a example to the younger Lady Saints.

“When we were blowing teams out, I helped the coaches with the younger players. I knew what to say and how to do it.”

Parker said she has countless memories playing for the Lady Saints. Parker made the All-Area team two straight years and 2018 MVP of the Dallas County Schools Holiday Basketball tournament. She also played in the 2019 Alabama All-Star basketball game.

“Playing in the All-Star game was fun, I was around a lot of people I didn’t know,” Parker said.

Parker will have an opportunity to extend her basketball career. She has scholarship offers from Huntingdon College and Wallace Community College-Selma. Alabama State and Alabama A&M have both expressed interest.

With a 3.5 GPA and 18 ACT score, Parker has already qualified academically to play as a college freshman.