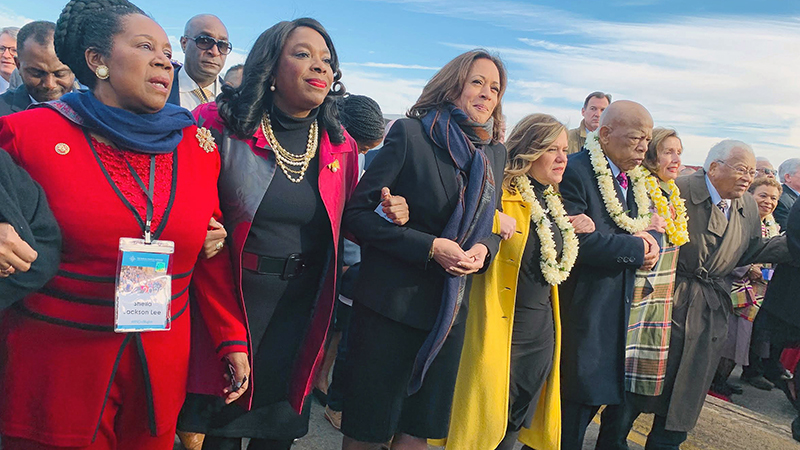 On Sunday morning, more than 50 members of Congress descended on Selma as part of the Faith and Politics Institute’s annual Civil Rights Pilgrimage, which wound its way through Birmingham and Montgomery over the weekend before winding up in Selma.

“Each year, I look forward to hosting the Faith and Politics Pilgrimage as an opportunity for members of Congress to experience the rich, complicated history of Alabama’s 7th Congressional District in order to better understand what heroes like John Lewis and so manyothers sacrificed to make our democracy more just and fair,” said Sewell. “John’s participation in the pilgrimage this year was especially meaningful, given his health challenges.”

In Birmingham, the delegation visited 16th Street Baptist Church, site of the 1963 bombing that resulted in the deaths of four young girls, and attended a play about the girls’ life and death.

On Saturday, the delegation touched down in Montgomery, where it toured the National Memorial for Peace and Justice before attending a dinner reception with Alabama Gov. Kay Ivey that night.

On Sunday morning, wide swaths of downtown Selma were cordoned off as the delegation marched arm-in-arm across the Edmund Pettus Bridge before heading over to Brown Chapel A.M.E. Church for the annual Bloody Sunday Community Commemorative Service.

“The highlight was our visit to Selma and the inspiring words Congressman Lewis gave to the group at the top of the Edmund Pettus Bridge,” Sewell said. “I hope my colleagues will feel a sense of renewal to protect voting rights and use this weekend as a catalyst, recommitting ourselves to the fight for a perfect union.”

The keynote speaker for the event was U.S. Sen. Corey Booker, D-NJ.

Following the service at Brown, the delegation trekked over to ArtsRevive for brunch before setting off down the road again.