A little boy walked into the newsroom… 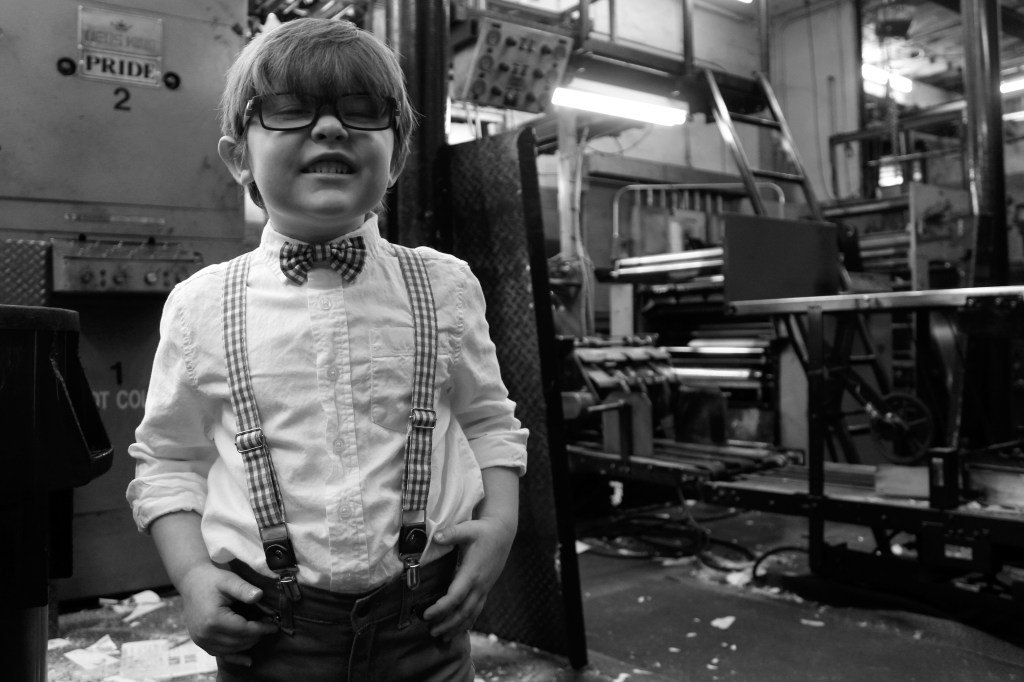 A little boy walked into the newsroom Monday, his father being dragged behind him by the boy’s tiny-yet-mighty grip, and declared himself Junior Copy Editor – he dictated which channel to set the TV to, nabbed a dime to grab a gumball from one of the machines in the breakroom, pounded the floors with his black sneakers as he ran from one end of the newsroom to the next, continually adjusted his suspenders and bowtie and stuffed spoonfuls of brown sugar oatmeal into his mouth as he talked about China and the coronavirus, the Democratic primaries and the strange desire he had to crawl into the press and see how it works.

As exciting as it would make the story had this boy aimlessly wandered into the newsroom and began barking orders at the journalists inside, that’s absolutely not the case – the little boy is my four-year-old son, Kieran, and few are the things that bring him more joy than tagging along for a morning at the Times-Journal.

Perhaps all little boys are this way – my father worked at Bush Hog in Selma for 25 years and, though I only got to stop by for a visit once, I was always mystified by what my father did each day – but my son shows a particular interest in my work, or at least in the excitement that explodes from the building in which I work.

The only time he wears his little button-up, slacks, suspenders and bowtie is when he “goes to work” – he’s a ball of energy that explodes into shards of filth on most days, so dapper duds are generally far from his mind – and he’s constantly asking me when he’ll be able to “make the news.”

The first time I showed him the press, he was amazed.

“Is that where you make the newspaper, daddy?”

“It certainly is,” I said in response.

“I hope nobody throws me in there and turns me into news.”

My son seems to have a penchant for soaking up and spitting out information – I listen to the news constantly and, unlike his sister, Kieran actively listens to the broadcasts, retains the information and sputters it out at random times.

The coronavirus, for instance, has become one of his favorite topics of discussion – we recently had a few friends, who our children know as aunt and uncle, over for dinner; as we were sitting down to our meal, Kieran said, “So, the coronavirus is killing people in China, even the doctor that tried to tell everybody about it. Isn’t that crazy?”

That my son is discussing current affairs is shocking enough, but he goes further than that – listening to a recent broadcast on NPR, my son heard a story in which a man stated that black men in America “live with a target on their backs;” three days later, as our family was riding down the road to some forgotten destination, my son asked the following: “Daddy, why is it so hard to be a black man in America?”

While guessing what might spring from my son’s mouth at any moment is exciting, and any additional moment I get to spend with him his most certainly time well spent, I believe there is something to be said for fathers bringing their sons along to the job.

Though I hope my son will choose a profession other than journalism, lest he be doomed to the high-stress, penny-scrounging lifestyle of his father, there are few joys greater than seeing my son’s eyes light up when he watches me work or hearing the excitement in his voice when I tell him he’s coming to work with me.

I know it’s not the newsroom or the journalism business that he’s so excited about – he’s excited to spend a few more hours with his old man and any interest beyond that is little more than a symptom of that.

Like all things, those days will end and I will surely count myself fortunate that, once, a little boy walked into the newsroom.

Kids at the ballot box