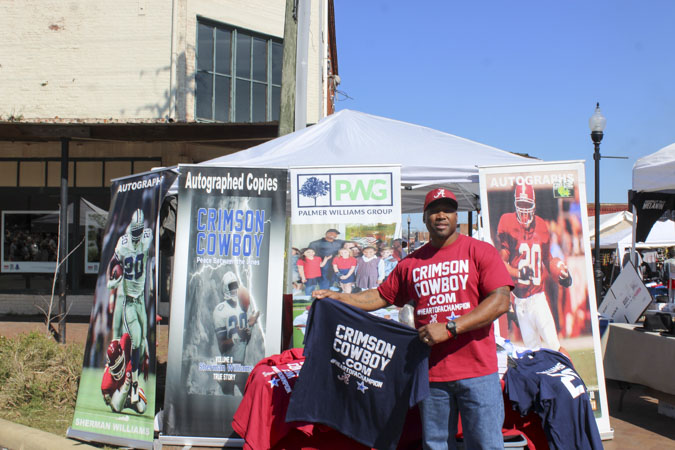 Sherman Williams is grateful for a second chance to rebuild his life.

The former Alabama running back had a booth at the Bridge Crossing Jubilee on Saturday. Williams signed autographs, sold books, Alabama t-shirts and Dallas Cowboys t-shirts with his name and number 20 on back.

“It’s the history of Selma and the Bridge Crossing Jubilee,” Williams said. “Some people know me playing football at Alabama. Being around my own people is a good thing.”

Williams won championships in high school, college and NFL, a rare accomplishment for a football player.

At Blount High School, Williams was named Class 5A player of the year as the Leopards won a state title in 1990.

Williams’ life took a dramatic turn on Dec. 6, 2000 after being found guilty by a federal jury in Mobile of one count of conspiracy to distribute marijuana and two counts of attempting to possess marijuana with intent to distribute. He also pleaded guilty to a counterfeiting charge. On March 26, 2001, U.S. District Judge Charles Butler sentenced Williams to 15 years, eight months in prison and ordered his incarceration to be followed by four years of probation. He was released in March, 2014.

The experience in federal prison inspired Williams to write a book, “Crimson Cowboy: The rise and fall of a three-time champion,” released in 2015. The book chronicles Williams’ lifestory.

Williams has a non-profit foundation, Palmer Williams Group, which he co-founded with former Alabama wide receiver David Palmer. The organization gives back to the youth.

“I tell the kids that education is important,” Williams said. “Reading is important. I also tell kids if you have a passion, use that passion to the best of your ability. You never know what God has in store for you. I wasn’t the biggest, strongest or fastest person. It was my passion that made me successful.”