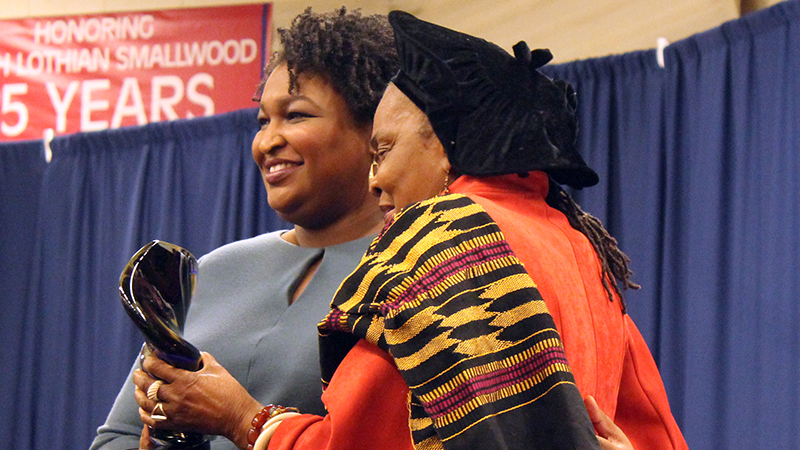 As part of the weekend’s Bridge Crossing Jubilee commemorations, The Martin and Coretta King Unity Breakfast took place at Wallace Community College – Selma (WCCS) on Sunday morning at 7:30 a.m.
A slew of Awards was presented at the event, including the National Unity Award to Stacey Abrams, the International Unity Award to Coumba Toure, the International Peace and Justice Award to Leymah Gbowee and the Family Unity Award to Martin Luther King III, his wife Arndrea King and his daughter Yolanda King.
After receiving the Award, Abrams took the opportunity to speak to the audience about unity.
“Unity is not simply about justice,” she said. “Unity is about perusing justice, even when justice is hard to come by.”
After Abrams’ speech, the awards portion of the event took a detour as Democratic presidential hopeful Mike Bloomberg entered the WCCS gymnasium to speak to the event’s large audience.
During his remarks, Bloomberg told the audience his plans for “economic justice” by promising to close wealth gap between African Americans and whites in America by helping African Americans buy homes and own business.
“When I become president, I hope I will, I promise I will be a partner to black communities. But first things first, I’ve got a primary to run and win,” said Bloomberg. “We’ll see what happens.”
Presiding the awards, Sen. Malika Sanders-Fortier, U.S. Rep. Terri Sewell, D-AL, and U.S. Sen. Doug Jones, D-AL, all delivered remarks.
Sanders was the first of the three, and she used her time to rally support for the City of Selma.
“The vision [of the Civil Rights Movement] was not just to pull a lever and vote,” said Sanders-Fortier. “People sacrificed their lives not to vote, but because they knew that the vote would lead to something. And that something is healthcare in the state of Alabama. We need Medicaid extension. That something is education for every child… That something is called the beloved community. We believe that Selma should be the model of the beloved community. Where we go from high crime and violence in our community to no crime and no violence… Please support Selma…”
During Sewell’s turn at the podium, the Representative spoke about the importance of being both “seen and heard”, “seen” by participating in the upcoming Census and “heard” by voting in the then upcoming election.
“The United States Census is right around the corner,” she said. “It is critically important that everyone of us counts. If you’re not counted, you don’t count. There are trillions of federal dollars every year that come down based solely on population… Let’s make sure that we are seen.”
Sewell also used her time at the podium to voice her support for Former U.S. Vice President Joe Biden for President.
“I’m going to tell you why I’m voting for Joe Biden,” said Sewell. “Joe Biden not only knows me, he knows you. We need at this time to use our vote wisely. To vote for – I think – a Democrat, a real Democrat, who been a Democrat his whole life. We need someone who, on day one, can roll up their sleeves and do the job and makes sure that this is not the new normal. This can’t be the new normal. We need a return to civility. We need someone who can, from day one, be presidential.”
Jones similarly voiced his support for Biden during his turn at remarks.
“It is time to restore this country’s dignity, this country’s respect. That is what’s at stake this year,” he said. “And there is no one more suited or better prepared, no one with more integrity, no one more committed to the fundamental principles to make this country what it is than my good friend of 40 years, Joe Biden.”