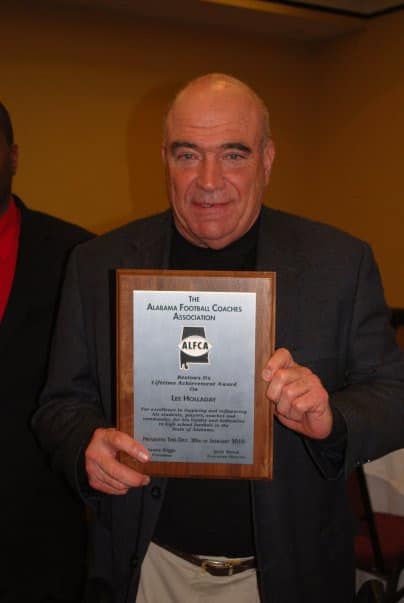 A 55-year coaching veteran, Holladay attended Orrville High School, starring in football, basketball and baseball. Holladay also was head football coach/headmaster at Meadowview Christian School in two different stints: 1989 and 2001. The Trojans went 7-5 in 1989 and 4-6 during the 2001 season. Holladay also was an assistant coach at MCS and Keith High School.

MCS head football and basketball coach and headmaster Bob Taylor also has fond memories of Holladay, who also coached at then-Catherine Academy from 1994-1997. Holladay went 28-18 in four seasons at the Wilcox County school.

“Coach Holladay was a great coach, but an even better man,” Taylor said. “We coached against each other.”

For Holladay his longest coaching stint was 14 seasons at Excel High School, where his squad went 43 regular season games without losing from 1972-76.

Holladay compiled a 222-148-6 record in Alabama for a winning percentage of .600. Overall, he won 239 games overall that includes Florida. The Alabama Football Coaches Association presented him with a Lifetime Achievement Award in 2010.