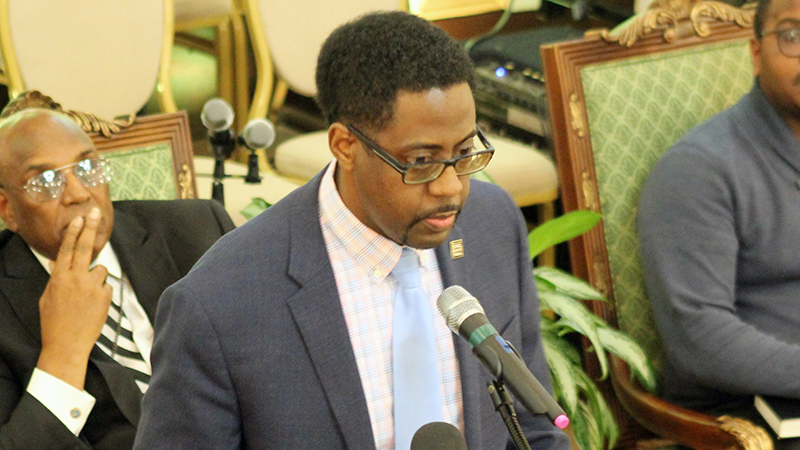 This weekend’s Bridge Crossing Jubilee commemorations officially began Thursday night with a Mass Meeting at Tabernacle Baptist Church.
Each year, the Mass Meeting commemorates the first Mass Meeting of the Voting Rights Movement.
Before the evening’s guest speaker, Dr. Gerald L. Durley, took to the pulpit of the historic church, Dallas County Probate Judge Jimmy Nunn, Rep. Prince Chestnut and Sen. Malika Sanders-Fortier all delivered greetings.
“I wouldn’t miss this for the world,” said Nunn. “I thank God that he has allowed me to be here to see so many beautiful faces in Dallas County in the City of Selma.”
Nunn welcomed everyone in attendance at Thursday’s Mass Meeting to the weekend-long celebration of the 1965 Voting Rights Movement.
“We are retracing the steps of the first mass meeting that was held here at Tabernacle Baptist Church in which planning for the Civil Rights movement started,” said Nunn. “It is a remarkable and historical event, this weekend, and I am glad that I am part of it. God has brought us a mighty long way.”
During Chestnut’s turn a t the microphone, the District 67 Representative discussed some “overlooked” parts of history, specifically Malcolm X’s role within it.
Chestnut spoke to the audience about an “almost convergence” that took place in the February of 1965 roughly one month before Bloody Sunday.
“This almost convergence took place when Dr. [Martin Luther] King and many other folks were put in jail,” said Chestnut.
According to Chestnut, while King and other activists were jailed in Selma, Malcolm X was speaking at the nearby Tuskegee Institute.
After being moved by his speech, those in attendance urged Malcolm X to travel to Selma to see if Dr. King and his fellow activists could be released from jail.
Chestnut said Malcolm X initially didn’t want to interfere with Dr. King and what he was doing in Selma, but decided to come anyway because he couldn’t think of a better place to go to understand the deprivation of rights of the Black man in America.
Chestnut said while Malcom X was in Selma, he spoke to a group of 3,000 students from Selma University and the Tuskegee institute.
Afterwards, Malcolm X was asked by a local reporter what he thought of Dr. King and his philosophy of nonviolence.
“‘Look’,” said Chestnut, relaying Malcom X’s response to the reporter. “‘If someone is nonviolent with me, I’m going to be nonviolent with them. But the minute they cross over into violence I’m going to defend myself and I would encourage the people of Selma to defend themselves and to peruse the right to vote by any mens necessary.’ Needless to say, Dr. King was let out of jail the next day.”
Chestnut challenged the audience to think about what might have happened if Malcolm X had invested more time in Selma.
“Just one day in Selma got King out of Jail,” he said. “We talk about Martin and I love Martin, he deserves all the credit he gets, but we must not forget what Brother Malcolm did for this city and state and country and World.”