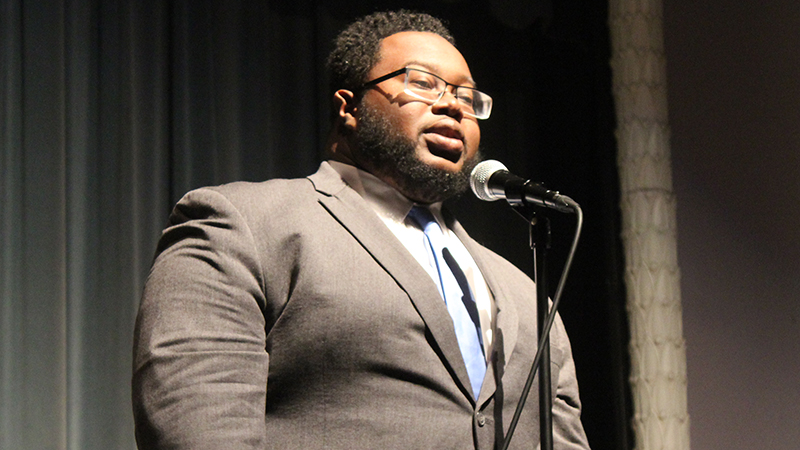 Candidates vying for the position of constable, tax assessor, tax collector and county commissioner were all invited by the committee to take part in Tuesday’s forum.

DCDEC Vice Chairman Billy Young delivered greetings to all of the candidates and citizens gathered in the auditorium.

“We all know that next week, we have some important decisions we have to make,” said Young. “We have to go to the polls next week and we, Dallas County, have to vote for some very important races… Tonight, The Dallas County – your Dallas County- Democratic Executive Committee decided that it was important enough that we have this forum this evening so that you can put some face with some names… and you can hear from individuals seeking public confidence… It’s our American duty and it is an American thing that we should enjoy, that we have the right to go vote.”

Each of the candidates was given two minutes for an introduction, asked a handful of questions and then had one minute for closing remarks.

Those vying for constable were scheduled to go first, however none of the candidate were in attendance Tuesday night.

Since no constables were in attendance to introduce themselves to voters, the forum moved ahead with those vying for Dallas County Tax Assessor.

After both candidates said their piece and answered questions, Dallas County Tax Collector Candidates Janet Frasier, then Tanika Wagner-Neely took to the stage.

With all candidates vying for tax positions having said their piece, candidates running for Dallas County Commissioner then had their turn to speak to voters.

District 1 Dallas County Commissioner Valerie Reubin was first, and the only District 1 commissioner candidate in attendance.

Reubin’s only challenger is Connell Towns, who held the seat on the commission before Reubin was elected the first woman to serve on the Dallas County Commission four years ago.

If reelected, Reubin said she would continue acting as a “servant to the people of Dallas County” and being active within the community.

District 2 Candidates Roy Moore, the incumbent District 2 Commissioner, Mike Irwin and Vivian Rogers were the next group of candidates to speak

Irwin was the first of the three to address the crowd, followed by Moore and finally Rogers.

Irwin focused said he would offer hope to Dallas County “when and not if” he is elected in March, while Moore leaned on his 28 years of experience in the District 3 Commission seat and Dallas County’s record of perfect audits each year.

Rogers promised potential voters transparency and availability and said she would “do whatever it takes” to meet the needs of citizens.

District 3 Candidates Channie Chapman and incumbent Curtis Williams were the next to speak.

Chapman went first, telling the crowd she has a heart for public service and experience writing grants and a counselor, which she said would be an asset to the commission.

Williams ended his remarks by telling voters to “vote for experience” on March 3, saying you wouldn’t go to a doctor or hire a lawyer without experience.

Four of five of the candidates vying for the District 4 seat were the last group to take to the stage.

“I’m running because I love this county and I have hope for its future,” said justice.

Lumpkin was next to speak, touting his experience as an Orrville City Councilman as an asset.

“Being a councilman and being a commissioner goes hand in hand,” he said. “I would just be serving on a wider scale.”

Nickles spoke next, elaborating on the strong working relationship of the current County Commission and Probate Judge and Commission Chairman Jimmy Nunn.

Nickles also used the opportunity to say that “fixing” County Roads- a popular talking point during the forum- was not the sole purpose of the commission.

“Ninety-five percent of what we do is not dealing with roads,” he said.

Barry Allen was the last of 14 candidates to address the crowd Tuesday night, citing his “passion for the people of Dallas County” as reason to be elected.

Young delivered the forums closing remarks, thanked all of the candidates and attendees for their time, and encouraged everyone to head to the polls on March 3.