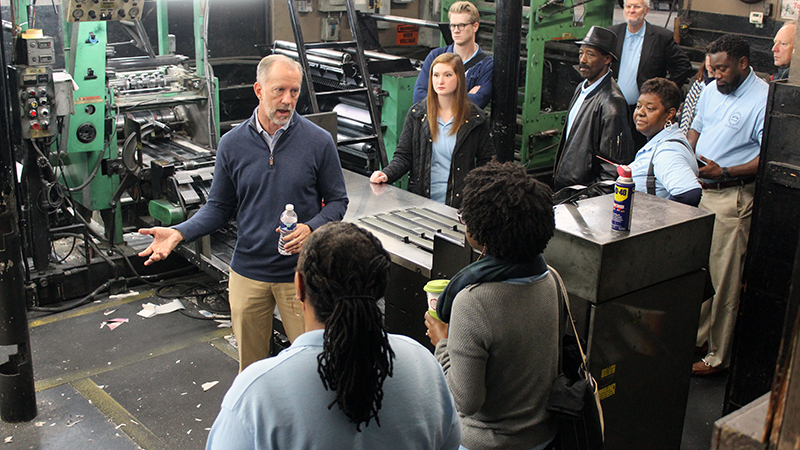 Members of the 26th Leadership Selma-Dallas County class stopped by The Selma Times-Journal office Thursday morning as part of a program aimed at acquainting participants with the various businesses, industries and organizations that keep the area humming each day.

According to Dallas County Extension Coordinator Callie Nelson, who heads up the program, Thursday’s visits were focused on social services and the media – following their visit to the newspaper office, participants checked in on the Edmundite Missions, the Dallas County Human Resources office and the Selma Area Food Bank (SAFB).

“If you’re going to be a leader…you can’t effectively do your job if you don’t know what’s in your community,” Nelson said, noting that the program aims to provide participants with the opportunity to “look and learn” across a number of the region’s “key industries.”

While touring the newspaper office, participants heard from Times-Journal Publisher Dennis Palmer about the ins and outs of getting the newspaper out each day and learned a little about the paper’s parent company, Boone Newspapers, which owns more than 90 newspapers across a dozen states.

Prior to Thursday’s round of visits, Leadership participants stopped by International Paper, the Dallas County Jail, the Selma Police Department (SPD), Trustmark Bank, Selma Mayor Darrio Melton’s office, the Selma Interpretive Center and other prominent operations across the area.

“It’s really eye-opening for everyone involved,” Nelson said of the visits, noting that some take participants wholly by surprise as they previously had no knowledge of certain businesses or the operations that take place within their offices.

“It enlightens us on what goes on in the city, how everything kind of works together,” Smith said. “Every business is an important part. It just all needs to work together as a unit.”

Edmundite Missions Executive Assistant to the President and CEO Dakota Punzel added that the visits give participants an opportunity to get information on the variety of resources in the community and specifically noted the importance of the local media.

“There’s all of these resources out there and sometimes people just don’t know about them,” Punzel said. “The newspaper has done a really good job, especially recently, of focusing on a lot of that and a lot of the positive things coming out of Selma.”

Nelson noted that the local newspaper plays an important role in the local community and Leadership participants should have an opportunity to explore that role and understand how it’s executed each day.

“The newspaper reports on what’s going on in the community each day…and it’s good for us to come and see where that comes from,” Nelson said. “[The newspaper] has a big impact on what people know and how they think – what’s printed in the newspaper shapes the way people think about this community.”

“Our media has always been necessary,” Smith said. “This is a very important part of Selma.”