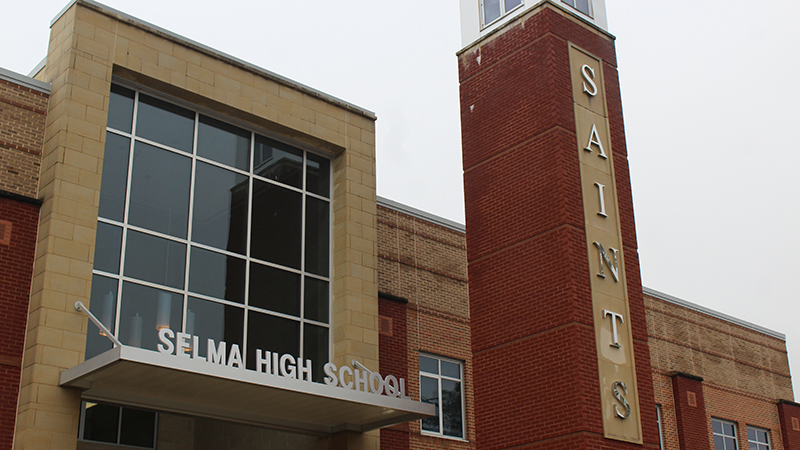 Selma High School will soon celebrate its 50th Anniversary with a series of event to be held Feb. 27 and 28.
50 years ago, in 1970, Selma High was formed in response to court ordered integration and white A.G. parish merged with black R.B. Hudson.
Selma High alumni t include former Auburn University Football Coach Ralph “Shug” Jordan, MLB standouts Terry Leach and Jai Miller, NFL wide-receiver Ben Obomanu, James Perkins, Jr., the forst African-American Mayor of Selma and U.S. Congresswoman Terri Sewell.
The 50th Anniversary Celebration is being coordinated by Selma High Hospitality and Tourism Teacher Tiffany Moore.
While Moore said that she is not a Selma High Alumni, she’s learned a great deal about the school since she began researching.
“It’s all so very interesting to me,” she said of learning of Selma High School’s past.
Moore has a series of events planned to celebrate the school’s anniversary which will take place Feb. 27 and 28, coinciding with the Annual Jubilee Festival, a scheduling move Moore said was intentional so that people visiting town for the festival wouldn’t have to make two separate trips for both events.
According to Moore, the theme of the Anniversary is “Stronger Together”.
Moore said that the celebration will examine Selma High’s previous history as a ‘whites only’ school as well examine the future of the institution.
“We’re appreciating it all, good, bad and ugly,” she said.
Among the festivities will be an A.G. Parish luncheon in which A.G. Parish and Selma High Alumni alike will be able to reflect upon the school’s history together.
Moore said the luncheon will take place in the Selma High School Media Center, which features the former entrance to A.G. Parish High School as one of its walls.
In addition to the A.G. Parish luncheon, Moore said there would also be a forum in which ‘community officials” would be able to interact with Selma Alumni to discuss the future of the school.
“We want to discuss how we can go forward,” said Moore. “Kind of like a think tank.”
The climax of the anniversary celebration will include an anniversary dinner in which their will be several awards given.
Moore said awards categories include a “most active class” award, a “distinguished principal award” and several awards to local businesses and organizations who’ve shown support to Selma High School over the years.
Moore is asking for community feedback to determine who should be the recipients of these awards.
In addition to nominees, Moore is also seeking stories and photos for the program.
“The Moore documentation the better,” said Moore.

The Anniversary schedule is as follows: