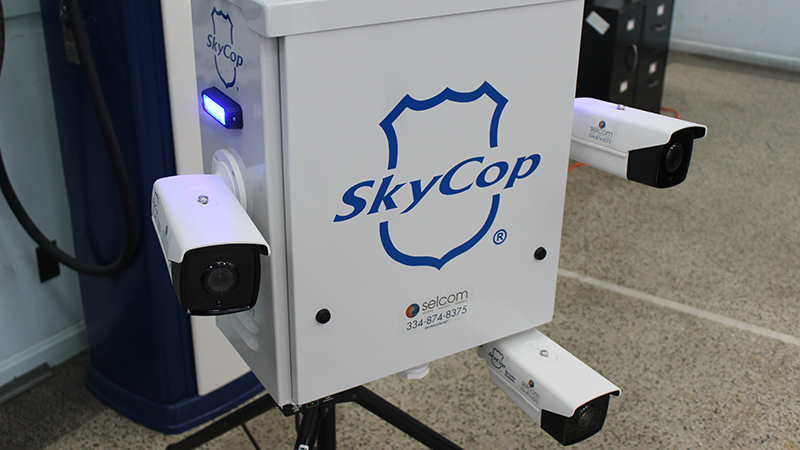 Several Selma organizations have come together to ensure the safety of Water Avenue, Selma’s arts and entertainment district.
Blackbelt Benefit Group, Play Selma Music Hall, Cougar Oil Company, The Selma Police Department (SPD, ArtsRevive, Gallery 905 and Selcom have all joined forces to purchase Sky Cop security cameras to monitor Water Avenue.
“The way look at it, Water Avenue is our entertainment district,” said Rex Jones of Cougar Oil and ArtsRevive Board President. “We’re all trying to focus on Water Avenue. That’s where we’ve got some growth. There’s a lot of positive news on Water Avenue.”
According to Jones, the group has attempted to work with police chiefs in the past but nothing was able to come to fruition until Kenta Fulford was sworn in as SPD Chief in January.
“We’ve all been waiting for the right project,” said Jones. ‘Everybody pitched in though, and we were finally able to do this. We want to do our part to help [SPD] turn everything around.”
The Sky Cop camera’s will be placed on Water Avenue to deter unwanted activity, reduce and eliminate motor vehicle break ins, ensure the safety of the arts and entertainment district, foster economic and community development, provide data to local law enforcement to use as evidence and diminish liability to citizens and organizations.
According to Selcom’s Rick Williams, is equipped with facial recognition and license plate recognition technology and can identify suspicious vehicles and persons from data placed in a database accessed by all Sky Cop Cameras.
“There is an infinite amount of artificial intelligence and technology we can put into these systems,” said Williams.
Bill Sexton, also with Selcom, said the cameras are successful used across the country including Tennessee, Mississippi, Arkansas and along the Texas border.
BBG Representative Carl Bowline described the Sky Cop Cameras as a “force multiplier” that will help the SPD and other local law enforcement agencies collect data and intel from places that they can’t be all the time.
“BBG sees this as an extension of inviting people into the community to continue to make a safe environment for the Water Avenue arts and entertainment district,” added Bowline. “As development continues, BBG sees this as a way to ensure safety and make sure people are comfortable. Having this [Sky Cop camera] here will provide an additional feeling of safety, and it will be safer.”
Jones said that creating a safe Selma arts and entertainment district is an integral part to ensuring Economic development by contributing to the Queen City’s quality of life.
“Local nonprofits are doing more than putting on concerts and art shows, we’re improving quality of life to attract businesses,” he said. “By increasing the quality of life and making things safer, it helps with things like economic development.”
According to Jones, exact locations for the two cameras are still being discussed.
Jones said that the cameras will like be placed near ArtsRevive and near the soon to open St. James Hotel.
“We’ve got options as far as where to put them, but we’re still trying to figure out what would be best for everybody,” he said.
‘We’re all ready to go,” said Williams. “We’re just trying to nail down the right location.”
Jones said the camera would be in operation within two months.