Reese Foundation weighs in on petition to rename bridge 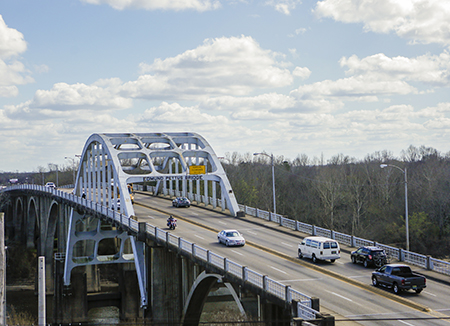 The Edmund Pettus Bridge is shown from the third floor of the recently expanded Selma Interpretive Center.

The F.D. Reese Foundation over the weekend weighed in on an online petition, reported to have as many as 8,500 signatures, to rename the Edmund Pettus Bridge in honor of civil rights icon U.S. Sen. John Lewis, D-GA, who recently announced his diagnosis of Stage 4 pancreatic cancer.

The statement goes on to recall the history of Selma’s “Courageous Eight,” the monicker bestowed upon the members of the Dallas County Voters League, who were responsible for bringing Dr. Martin Luther King Jr. into, and thus national attention to, the struggle for voting rights in Selma.

The statement notes that it was the group’s “tenacity and resilience” that pushed them to recruit King and the Southern Christian Leadership Council (SCLC) “to aid in the struggle of voter’s rights,” which directly led to the march across the Edmund Pettus Bridge, “the highlight of the Voting Rights Act of 1965.”

With that in mind, the foundation urges in the statement that consideration be given to renaming the bridge for one, or all, of the men and women who were part of the Voting Rights Movement in Selma – specifically, the statement notes, the members of the “Courageous Eight,” which include Ulysses Blackmon, Amelia Boynton, Ernest Doyle, Marie Foster, James Gildersleeve, J.D. Hunter, Henry Shannon and the foundation’s namesake, Frederick D. Reese.

“In recent years, there have been several debates, petitions and protests to have Confederate monuments and the Confederate flag removed,” the statement said. “Some argue that keeping the monuments and flag allow us to remember the history this country was built on.; others argue removing the monuments and flag removes the constant reminder of the hate the ancestors of African-Americans endured. It is not our goal to have the name of the bridge changed, but, if the bridge must be renamed, let’s remember those from Selma who were instrumental in the march from Selma to Montgomery. Name the bridge for the ‘Courageous Eight’ and the foot soldiers who took a stand not only for Selma, but for the nation.”

At a recent Selma City Council work session, attorney Faya Rose Toure called on the council and city to support the effort to rename the bridge, calling the bridge’s namesake, Edmund Pettus, a “domestic terrorist” for his involvement with the Ku Klux Klan (KKK).

According to a 2015 article in Smithsonian Magazine during the 50th anniversary of “Bloody Sunday,” Pettus moved to Selma after the end of the Civil War, in which he was a brigadier general for the Confederate Army, and went on to serve as Grand Dragon of the Alabama Klan during the final year of Reconstruction.

The article quotes Alabama historian Wayne Flynt and University of Alabama history professor John Giggle, who weigh in on both Pettus’ history and the likely reasoning behind naming the bridge for him in May 1940, more than three decades after his death.

“His fanaticism is borne of a kind of pro-slavery belief that his civilization cannot be maintained without slavery,” Flynt is quoted as saying in the article, noting that Pettus was a rarity in his native Limestone County, which largely opposed secession, and supported the Confederacy due to his belief in white supremacy. “He lives in an area full of people who oppose secession. He is going against the grain. He’s not a reluctant pragmatist, brought to secession to go along with the people. He’s a true believer.”

“The bridge was named for him, in part, to memorialize his history, of restraining and imprisoning African-Americans in their quest for freedom after the Civil War,” the articles quotes Giggle as saying.

At age 75, Pettus was elected to serve in the U,S, Senate after a campaign that “relied on his successes in organizing and popularizing the Alabama Klan and his virulent opposition to the constitutional amendments following the Civil War that elevated former slaves to the status of free citizens,” the article states.

“That he was elected statewide demonstrates the power of a Confederate pedigree and the Ku Klux Klan political machine,” Flynt said in the article. “You didn’t get the nomination unless you had the support of white elites in the Black Belt.”

The article notes that, at the time, a petition was circulating to rename the bridge – the petition, which was addressed to the National Parks Service, the mayor of Selma and the governor of Alabama, was 40,000 signatures short of its 200,000 signature goal,