SCS partners with Samaritan’s Feet to provide students with shoes 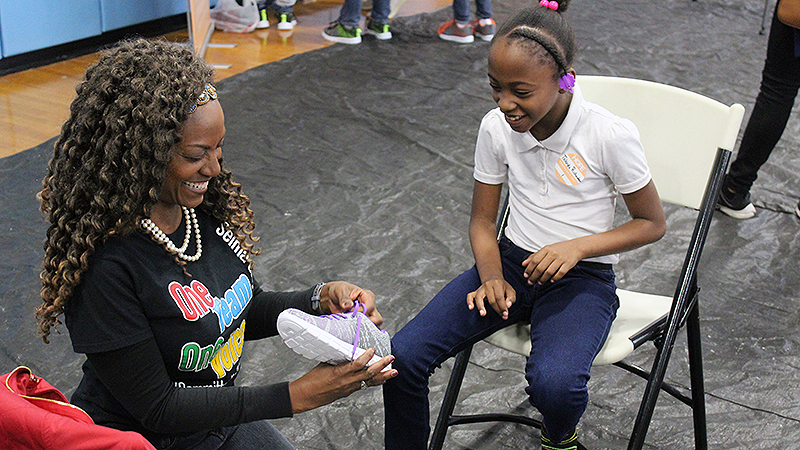 For the third year in a row, Selma City Schools (SCS) partnered with non-profit organization Samaritan’s Feet to provide kindergarten through second-grade students with new shoes.

“It’s one of my favorite days of the year,” said SCS Superintendent Dr. Avis Williams. “Just to see our babies come in and witness the excitement and joy they get from getting a new pair of shoes is sensational.”

“We provide a brand-new pair of athletic tennis shoes to low to moderate income communities all over the world,” said Samaritan’s Feet Regional Director Mythiquer Pickett.

According to Pickett, Samaritan’s Feet has distributed over 7 million pairs of shoes across 108 countries and 408 U.S. cities since the organization was founded in 2003.

Samaritan’s Feet partnered with fellow non-profit Sock Out Poverty to provide the SCS students with new socks to accompany their new shoes.

“We’re serving about 500 kids today, which is the largest distribution to kids I’ve ever done, so that’s really exciting,” said Sock Out Poverty Founder Princess Jackson.

Jackson, while only 16 years old, has also distributed socks to those in need in her home state of Texas, Florida, California and Washington D.C.

“Our goal is to go global and sock out poverty all over the world,” said Jackson.

As students entered the Selma High Gymnasium on Friday, Jackson was their first stop.

Pickett said that it meant a lot to him to be able to bring Samaritan’s Feet to Selma on Friday.

“We’re hoping to create servant leaders for the next generation by washing their feet and setting an example of humility,” he said.

Waheed speaks about the legacy of Courageous Eight at…