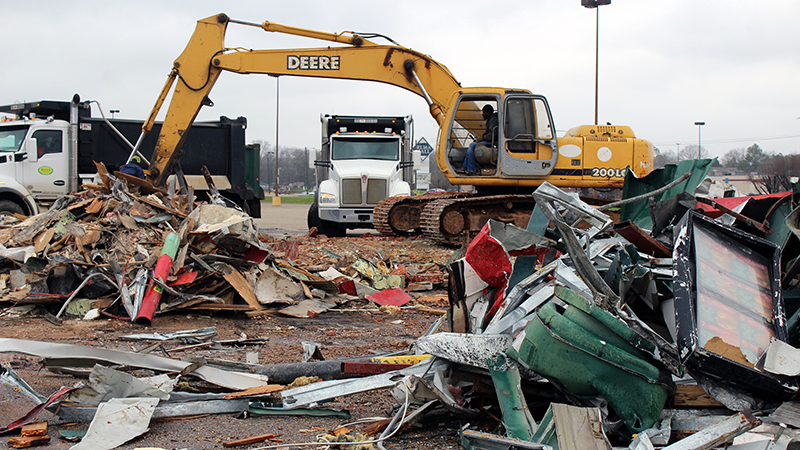 Beneath gray skies and a constant drizzle of rain, crews in dump trucks and excavators sifted through the wreckage left when Central Park, the burger joint situated along Highland Avenue, was torn down earlier in the week.

According to Selma-Dallas County Chamber of Commerce Executive Director Sheryl Smedley, the demolition is only the first sign of progress for the shopping center now owned by the Tuscaloosa-based Progressive Properties.

Smedley stated that the company purchased the shopping center, now christened the Selma Marketplace, last year with an eye toward securing high-traffic, prime retail space in the Queen City.

While the ground beneath the old Central Park will soon be the home of a new Huddle House restaurant, the company is marketing six spaces to potential retailers and business operations.

“It’s one of our prime retail districts that was have out there on that thoroughfare,” Semdley said of the Selma Marketplace shopping center.

For her part, Smedley forecasts that the new Huddle House will be open in the coming months.

“Normally, if they’ve torn it down, I would think it will be open by summer, if not before,” Smedley said. “[Developers are] generally pretty aggressive.”

Already the company has given the old shopping center a face lift in the hopes of attracting big-time retailers to the area and Smedley is optimistic.

“Hopefully, we’ll attract retailers to that area to come and see those spaces we have available,” Smedley said. “Of course, we always appreciate their investment in our community.”

A Selma Times-Journal article published in April 1989 heralded the coming of Central Park, which was hailed as the “originator of the double drive-through hamburger restaurant.”

The article notes that the chain’s location in Selma, which was selected after studies showed it to be “a progressive city with excellent growth potential and a strong economic base,” was one of the first in Alabama.

The restaurant was then owned by the Robert M. Davenport Company, Central Park’s largest franchisee, under the management of Kilgore.

The company established a new program, which would allow managers to function as owners and operators – at the time, Davenport stated that Selma was the first of many “outstanding, progressive cities” to be selected to pioneer the program.

A little more than a year later, in October 1992, The Selma Times-Journal reported a robbery at Central Park that included a teenager and two Central Park employees as co-conspirators.