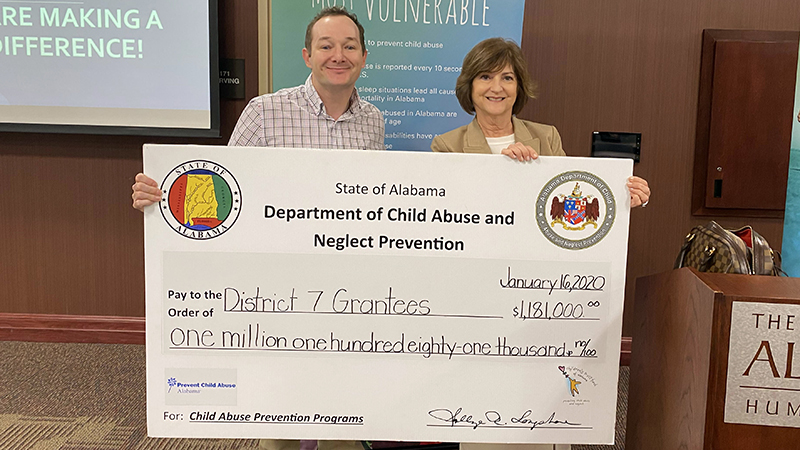 According to Thomas, the DCFRC has received grant funding from the organization for the last four years.

“Their support has been the foundation of our growth,” Thomas said. “They were the first major grant we received when I became director and the experience has helped me learn how to grant fund and execute programs.”

More than 120 grants were handed out to organizations and programs across the state aimed at supporting children and specifically preventing child abuse and neglect – along with the DCFRC, the Dallas County Children’s Policy Council received $90,000 for its Black Belt Fatherhood Initiative.

On hand for the presentations were Alabama Sen. Gerald Allen, R-Tuscaloosa, and Alabama Rep. Bill Poole, R-Tuscaloosa, to show their support for children’s education and advocacy efforts.

“Their support is crucial to the funding and they pledged to continue to fight for the needs of Alabama children,” Thomas said. “All of the agencies funded had an opportunity to discuss what they have been doing to help children across Alabama.”

The DCFRC’s Whole Parent program, which will take place every Tuesday and Thursday in February from 10 a.m. until noon, is a “holistic parenting class” that provides new parents with a wealth of information and the opportunity to access a variety of baby needs, such as car seats, pack-and-play sets and more.

While that program has been bolstered by the recent grant funding, Thomas noted that the DCFRC’s Positive Family Support (PFS) program, which is aimed at individual parents and offered year-round, will also benefit from the funding.