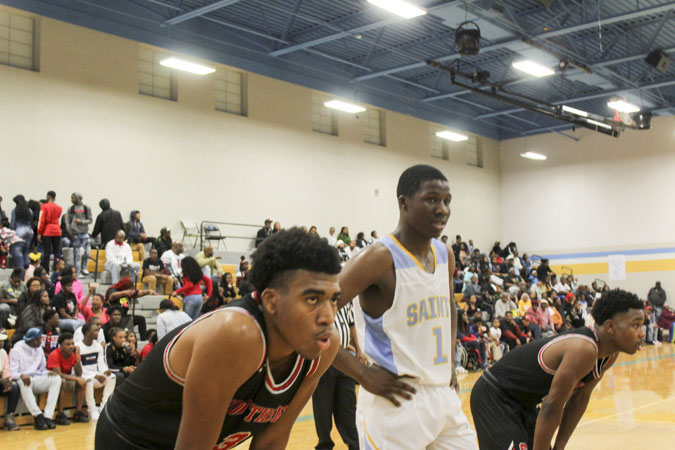 Selma High overcame a 12-point first-half deficit to complete a season sweep over its biggest rival.

Jarvis Moss scored 12 points, Javonte Stubbs and Michael Harris each had 11 for the Saints (12-5).

Southside led 26-12 early in the second quarter, but the Saints closed the period with a 15-1 run to tie the game at 27-27 at halftime. Davis’ trey tied the game.

Harris scored the Saints’ first four points of the second half and they never trailed again.

“We got off to a sluggish start, but once we got our legs under us, we did a great job defensively and played great team offense,” Saints coach Darron Rembert said.

Southside got within 46-43 with five minutes left, but Davis, Moss and Manzie all hit clutch three-pointers to put the game away.

Davis, one of seven Selma seniors, said it was crucial to end his career with a victory over Southside.

“It means a lot to beat Southside,” Davis said. “Everyone in the city of Selma looks forward to us beating them.”

Southside was led by its backcourt, Tae Spears and Christopher Thomas, combining for 34 points.

Spears led all scorers with 21 points. Thomas finished with 13 points.

Alexias Walker added 19 points, while Aeraonna Manuel had 13 points and 15 rebounds for the Lady Saints.

Khaleah Shanks led the Lady Panthers with a team-high 14 points.

Selma won all three meetings against Southside in girls’ basketball this season.