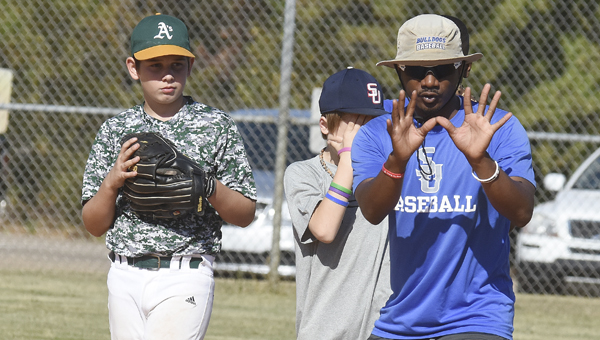 Selma University baseball coach Adrian Holloway talks to campers about how to position their glove during a drill Saturday at the Dallas County Sportsplex. --Daniel Evans

Registration is underway for the Dallas County Youth Recreational League in baseball and softball.

Baseball and softball registration will be held atRegistration is only at the Dallas County Courthouse Monday through Friday from 8:30 a.m. until 4:30 p.m.  Weekend registration hours will be from 9 a.m. until 2 p.m. on Jan. 18, Jan. 25 and Feb. 1. Registration ends on Feb. 28.

To register your child, parents are required to bring a valid birth certificate. Registration is free.

Applications can be picked up at the Dallas County Courthouse Annex building in Suite 107.

Newly hired Dallas County Athletic Director Richard Davis said players in the entire county are eligible to play in the league, including city of Selma residents.

“There’s not any difference with someone living in Selma or Dallas County, they can play in the league,” Davis said.

Davis said he expects a strong turnout by the time registration concludes at the end of next month. “I think everyone we’ve talked to has been favorable,” Davis said. “People have been pleased with what we’re doing.”

“The County Commission came to the conclusion that they wanted to run the Youth sports league,” Davis said. “People were concerned and wanted to know who’s running it.”