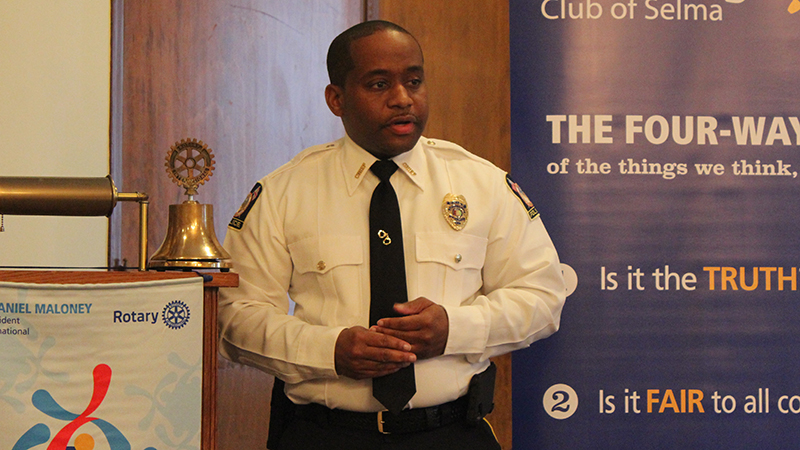 Kenta Fulford, the City of Selma’s new Police Chief, was the guest speaker at Monday’s meeting of the Selma Rotary Club.
Fulford, who was sworn in as chief on Jan. 2, discussed his plans to make improvements within the Selma Police Department (SPD) with the Rotarians.
Neighborhood watch was the first topic the chief brought to the attention of the Rotary Club.
“…That’s going to be the main thing that I’m looking at doing, neighborhood watch,” said Fulford. “It’s important to me that the community know who the officers are within the department and the officers know the neighborhoods they’re patrolling.”
Fulford announced that, within the “next couple of weeks,” a webpage would be available listing the contact information of SPD supervisors.
“I want to make the department accessible to everybody. Because, like I said, it’s going to take all of us working together to get things turned around,” said Fulford.
Fulford expressed his passion for the neighborhood watch program, stating the importance of trust and communication between the citizens and SPD officers.
The SPD chief said that once the police department has more officers, he would like to re-implement the SPD’s bike patrol program.
“Once we get the bike patrol up and going, you’ll see the bikes going through the neighborhoods again,” said Fulford. “If you see an officer riding around in your neighborhood, you can walk right up and tell him what’s going on in your neighborhood, what your concerns are and what you’d like to see happen in the neighborhood.”
A few questions from the Rotarians prompted more information about Fulford’s plans within the SPD.
In order to help with the recruitment and retention of officers, Fulford is discussing with the Selma City Council the possibility of paying officers with degrees a higher salary.
As of now, an officer only receives higher pay if they earned their degree while serving with the SPD.
Fulford said he’s also looking at the possibility of offering officers the opportunity to live in city-owned houses for free, aside from utilities.
“The city owns a lot of houses around here,” said Fulford. “That would be another incentive for them to come on board also.”
One Rotarian asked Fulford why it’s difficult to recruit and retain officers, to which Fulford replied that retaining officers wasn’t a unique problem to Selma.
Fulford said he learned in a discussion with Montgomery Police Chief Ernest Finley that the Montgomery Police Department is losing 60 to 70 officers per year.
“They’re having the same problems we are,” said Fulford.
According to the chief, Selma has 31 officers on patrol but, ideally, the city should have 60 officers.
Fulford said that SPD Capt. Natasha Fowlkes would be tasked with recruiting officers at job fairs at nearby universities, such as Alabama State University (ASU) and the University of West Alabama (UWA).