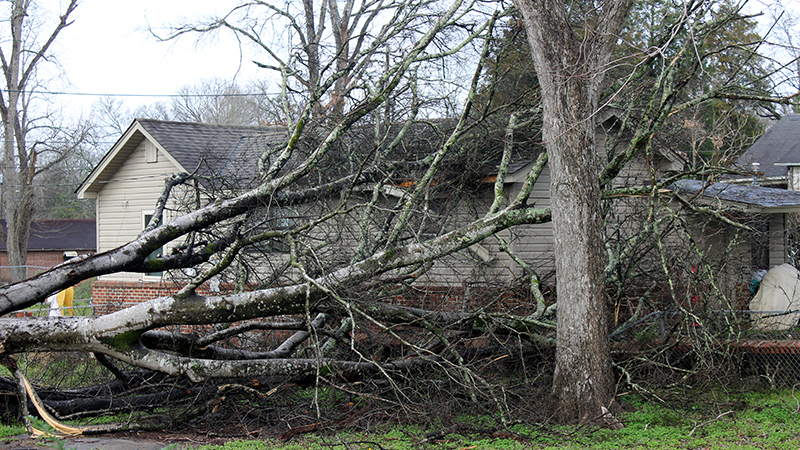 Severe storms swept across the southern portion of the nation and into the Midwest on Saturday, causing at least 11 deaths and an untold amount of damage – in Alabama, three were killed in Pickens County due to what the Alabama Emergency Management Agency (AEMA) called an “embedded tornado within a long line of intense thunderstorms.”

For its part, Dallas County was mostly spared, aside from limited reports of structural damage and downed leaves and thousands of power outages.

According to Dallas County Emergency Management Director Toya Stiles, the majority of reports coming into her office were for power outages and downed powerlines and trees across the county.

“There were no reports of homes damaged, fatalities or injuries,” Stiles said, noting that all local first responders, including volunteer fire departments and the Dallas County Roads Department, were responding Saturday.

Selma Police Department (SPD) Chief Kenta Fulford saw much the same thing, stating that there was “very minimal impact” to Selma, aside from power outages in Old Town and along Dallas Avenue.

“We had the storm shelter open for the weekend and monitored [it], but for the most part we patrolled neighborhoods checking for downed power lines and making Alabama Power and [the Selma] Public Works [Department] aware of the lines and trees, which were few,” Fulford said.

At least one home in Selma City Councilwoman Jannie Thomas’ ward saw a tree come close to collapsing its roof, crashing to the ground just inches away from the structure, and Thomas noted that there were several downed power lines and trees blocking streets.

“The wind blew shingles off the houses and stuff like that,” Thomas said. “But with all the rain we’re supposed to be getting this week, I don’t think anyone will be able to get anything done to their houses. We’re supposed to get rain every day this week.”

According to Selma City Councilman John Leashore, people in his ward saw much the same thing, though a large tree toppled on St. Phillips Street.

“It really tore the electrical lines down,” Leashore said, adding that the tree had been removed by the time he made his way to church the following morning. “Whoever worked overnight did a remarkable job.”

“While the storm brought many challenges to Ward 1 citizens, we were blessed the storm did not cause more damage or cost someone their life,” Bowline said. “[I] would like thank the hardworking crews of both Alabama Power and the city that assisted. Their efforts so often go without appreciation.”

Though the storms caused only minimal damage across the area, Alabama Power crews were on the scene through the night trying to restore power to the thousands of Dallas County residents that lost power Saturday, as well as thousands more across the state.

Around 2 p.m. Saturday, just after the storm touched down in the area, Alabama Power reported that roughly 81,000 people were without power across the state, including more than 10,000 customers across central Alabama.

In that first report, Dallas County was experiencing 5,650 outages – about an hour later, more than 19,000 people were reported to have lost power across central Alabama, including 5,500 in Dallas County, 7,400 in Montgomery County and 1,100 in Perry County.

Just before 7 p.m., Alabama Power released an update which stated that more than 10,000 people were still without power in central Alabama, though outages in Dallas County had dropped to 1,500.

Nearly 30,000 Alabama Power customers had their power restored as of 10 p.m. Saturday night and only 930 outages were still ongoing in Dallas County – power crews were then slated to work through the night across the state to restore power.

At 7 a.m. the following morning, only 1,600 customers were without power in central Alabama, including 420 in Dallas County – the company’s final statement, released around 3 p.m. Sunday afternoon, stated that 210 power outages were still ongoing in Dallas County, mostly in the Perryville and Plantersville areas.

In total, more than 202,000 people faced power outages due to Saturday’s storms across the state.