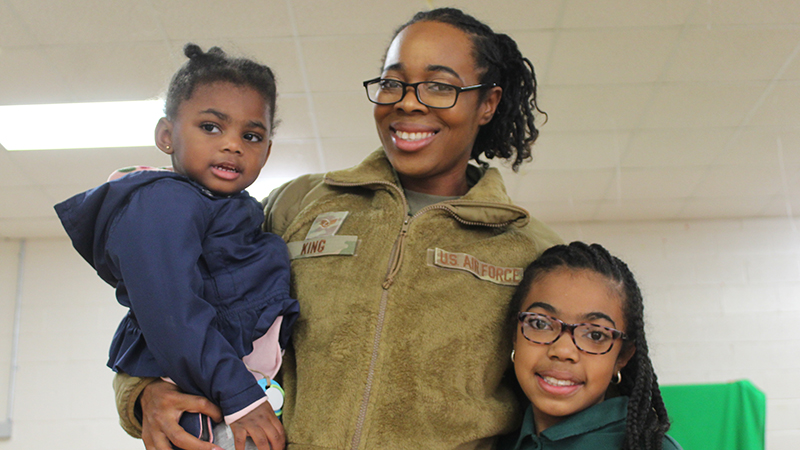 A mother and her daughters were reunited on Thursday morning at Edgewood Elementary School.

Staff Sgt. Ashley King coordinated with Edgewood Elementary staff to surprise her daughter, Kaleigh Willis, a student at the school, after being deployed to the Middle East for the past six months.

“It was priceless,” said Selma City Schools Superintendent Dr. Avis Williams, who was present for the reunion Thursday morning. “[King] has been gone for the entire school year and I can only imagine how difficult that’s been for [Willis] as one of our young scholars. It was just amazing to witness the light and surprise on [Willis’] face.”

Williams expressed gratitude for King’s service on behalf of Selma City Schools and said she was glad to see her return safely home.

After the moment of reunion, King grabbed the microphone to thank her family and the Edgewood staff for taking care of her child while deployed.

“To know that I have the people’s support is amazing,” she said.

As a product of Selma City Schools, a 2007 graduate of Selma High School, King said she wasn’t surprised by the level of support from the school’s staff and administration.
“It was a very happy moment,” said King. “I’m very thankful.”

“It was very surreal,” said Edgewood Elementary Principal Dr. Margaret Jones. “This reinforces how important it is to embrace the present. Or future is not always promised. It’s important to love those that are close to us.”

Library gears up for Medical Matters in 2020