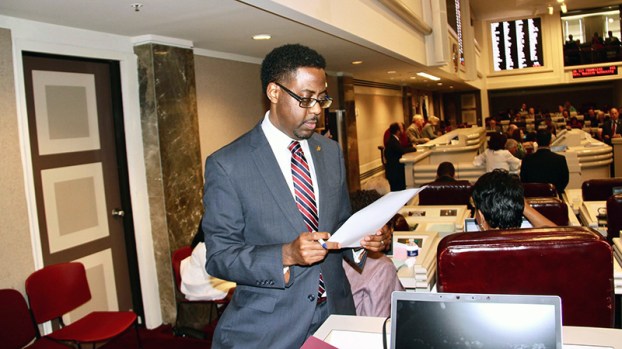 With the first day of the Alabama Legislature’s 2020 Legislative Session less than one month away, a stack of bills have already been filed in both the Alabama Senate and House.

In the Senate, new bills have been filed since a story ran in The Selma Times-Journal last week – since last Friday, Alabama Sen. Gerald Allen, R-Tuscaloosa, has filed a bill that would require all K-12 schools to play “The Star-Spangled Banner” at least once per week during school hours.

In the House, 10 bills have already been filed in anticipation of the Feb. 4 legislative kickoff, including the Alabama Economic Freedom Act from Alabama Rep. Mike Holmes, R-Wetumpka.

The bill would repeal wide swaths of the Alabama Constitution related to business privilege taxes, inheritance and estate taxes, incomes taxes, a state tax on net incomes of corporations and deductions of federal income tax from gross income.

The bill goes on to state that the legislature should enact laws to “implement a single rate consumption tax” in the state that would include language to eliminate “current state sales and use taxes, rental and lease taxes, lodgings tax, utility gross receipts tax, corporate tax income tax, individual income tax, mortgage and deed taxes, financial institutions excise tax, business privilege tax and insurance premium tax and replace all revenue generated from these taxes with a broad-based single rate tax based on consumption expenditures contributing to Alabama’s Gross Domestic Product.”

For his part, Alabama Rep. Prince Chestnut, D-Selma, questions the “strange timing” of such an offering.

“The economy is great,” Chestnut said. “I have not seen the data, but my commonsense informs me that massively altering the revenue streams or, as most economists would suggest, massively reducing it at this time would be literally life altering for so many people in the state. I am not sure what to make of it.”

Further, Chestnut had a plethora of questions regarding the drafting of the bill.

“Was this discussed with leading Alabama economists, the governor’s office, our treasury department and leading experts on the tax consequences and social impact to the state?” Chestnut wondered. “These are the questions I have. While there is a lot of partisan clamor for extreme tax cuts, these plans usually have no consideration for the transformative nature and side effects of taking potentially billions of dollars in revenue off the table. With struggling schools, a prison system in disarray, healthcare and palpable mental health challenges abound, passing [this] bill would be irresponsible if it removes revenue from the [Education Trust Fund] and General Fund. Moreover, I cannot imagine an entire class of professionals, such as accountants, tax lawyers and economists, sitting idly by as a group of legislators attempt to take away their livelihood.”

Another bill, penned by a member of Chestnut’s own party, is likewise being met with skepticism by the legislator.

Alabama Rep. Kirk Hatcher, D-Montgomery, has introduced a bill would require a special election to be held for any judicial seat vacancy that occurs within 45 days of a primary or general election.

“I do not think this will get far because it attempts to take away appointments from the governor,” Chestnut said, noting that current law allows for the governor to fill such vacancies. “I do not see that happening with the makeup of this legislature. The objective may be achieved through local acts, but a statewide general law is highly unlikely.”

In the case of a bill from Alabama Rep. Wes Allen, R-Troy, which would require a joint resolution from the legislature to pass rules that exceed a $1 million economic impact threshold, Chestnut is wary.

“I am not sure what the impetus for this bill may be, but it is certainly a balancing of interests that must take place to determine the route we should take,” Chestnut said. “Regulations often arise for good reason and you must consider the impact on the public. We should be cautious when easing regulations that may result in a negative [economic] impact.”

This March, three candidates will seek to fill the position of Dallas County Tax Collector, which is currently held by... read more