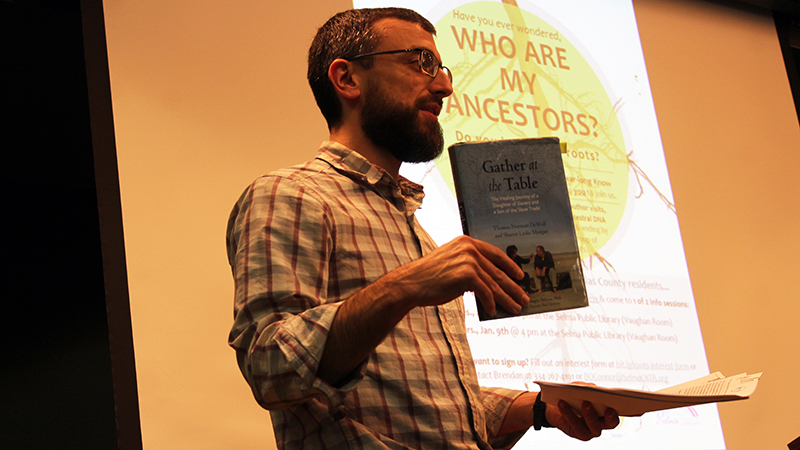 Selma Center for Nonviolence, Truth and Reconciliation (SCNTR) Senior Organizer Brendan O’Connor welcomed a small group of inquisitive visitors into the Vaughan Room at the Selma-Dallas County Public Library Tuesday afternoon to take part in the first information session regarding the organization’s genealogy project, “Know Your Roots,” which will take participants on a year-long journey to knowing and understanding their familial roots.

The project is part of a partnership between SCNTR and the Black Belt Community Foundation (BBCF), known collectively as Truth, Racial Healing and Transformation (TRHT) Selma, and the Black Belt African American Genealogical and Historical Society (BBAAGHS).

Monday’s meeting was aimed at familiarizing participants with the program before an official kickoff on Martin Luther King Jr. Day at the Edmundite Missions’ Bosco Nutrition Center.

Organizers are looking for 10 to 15 people to sign up for the project, which will provide participants with free DNA testing, a free genealogy consultation, a pilgrimage to the Equal Justice Initiative’s museum and memorial in Montgomery and more.

Participants will also take part in a series of book discussions centered around “Gather at the Table,” a book by Sharon Morgan and Tom DeWolf in which the two authors, a black woman  and a white man, confront the legacy of slavery and racism head-on.

O’Connor noted during the meeting that he and the other organizers wanted participants to know the level of commitment the project would require.

“We don’t want it to be overwhelming for people, but we do want a commitment,” O’Connor said. “This is deep work.

BBAAGHS representative Deborah Love was also on hand for Tuesday’s meeting and noted that her organization’s work is focused on more than simply providing people with information on their lineage – she wants to provide people with the tools and knowledge required to do their own research.

“We want to make sure you know how to do your research,” Love said. “We’re not just a genealogical society, we’re a historical society.”

Love noted that the organization has partnered with the local library for years on genealogical events, including the “Genealogy on the Spot” program.

Additionally, Love said her organization will provide a variety of offerings to participants in the “Know Your Roots” project, including a Genealogy 101 course and a talk on interpreting DNA results and protecting those results.

The length of the project is built on the idea that those that take part will be involved in “difficult conversations” and should build relationships with those taking the journey alongside them, O’Connor noted.

When the project has its official kickoff, there will be a community breakfast and a luncheon for participants.

After that, when the project is fully underway, participants will take part in a series of events stretching throughout the year – participants are expected to take part in at least half of the book discussions and BBAAGHS genealogy workshops and go through one genealogy consultation and the trip to Montgomery.