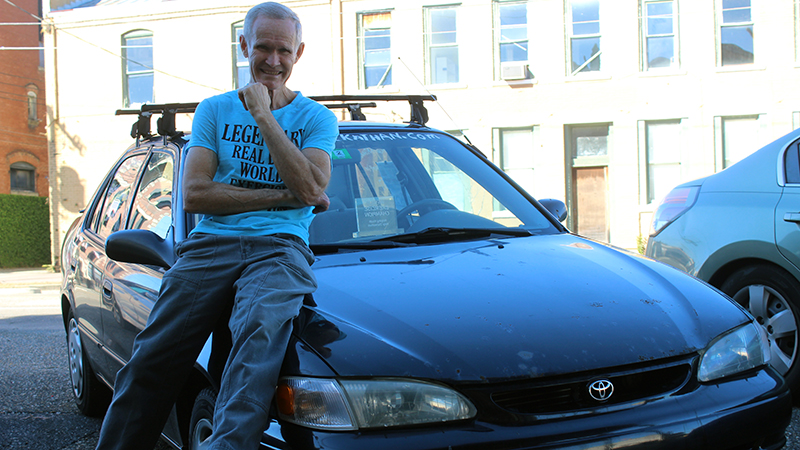 A New England wind blew a celebrity into the Queen City last week for a holiday visit with family – World Exercise Champion Bill Kathan drove 19 hours through snow, ice and rain and arrived in Selma Friday.

“I am the World Exercise Champion,” Kathan said. “There’s people that know me all over the world.”

In fact, the only reason Kathan found himself in The Selma Times-Journal newsroom earlier in the week is because people began recognizing him and insisting that he visit the local newspaper.

For Kathan, the road to becoming the World Exercise Champion began in 1998 – Kathan was watching Good Morning, America when a man did a record-breaking 5,103 jumping jacks.

Kathan thought he could do more  and, eventually, he proved it on ESPN.

But jumping jacks were just the beginning.

“I’ve got so many different things I’ve done,” Kathan said. “I have the most broken records and I’m the oldest in the world,” said Kathan, 67. “I believe the Lord has just given me this health and it’s such a blessing.”

To date, Kathan has broken more than 100 records in calisthenics and has accomplished some incredible feats in the process, including doing 41 push-ups in 30 seconds on his fingertips while perched atop pumpkins and executing a record-breaking 2.5 million jumping jacks in a year.

Kathan grew up working on his family farm in Vermont and got into track and field and gymnastics as a child but, finding he wasn’t very good at it, he gave it up.

“I just didn’t think I was ever going to be very good at it,” Kathan said.

And though he is now recognized far and wide for his calisthenic feats, Kathan is most grateful for the work he has been able to do with children.

“I don’t want people to think I’m out here just for show,” Kathan said. “I’m really out here for these kids. I’m just so glad that I have such a good reputation with the children. They just love what I do.”

For the last few years, Kathan has used his fame as a starting board for working with children between the ages of six and 12, traveling all over the country and teaching young people the importance of health and fitness.

Donors both large and small line up to support Kathan’s efforts, which have him traveling from one side of the country to the other teaching the gospel of good health to kids in school gymnasiums, community centers and more.

In fact, Kathan has dedicated so much of his time to traveling and working with children that he doesn’t have a stable home – Kathan mostly lives out of his vehicle.

“I don’t think I’ll ever get to retire,” Kathan said with a laugh.

Though his relatives only moved to Selma about a year ago from Florida, the World Exercise Champion is already considering a move to the Queen City.