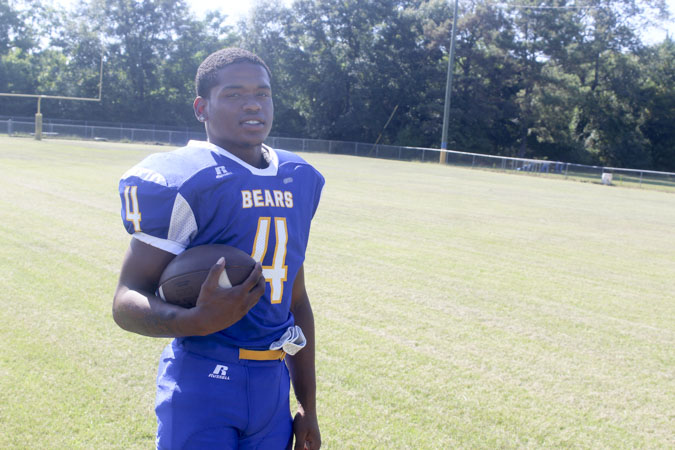 The senior quarterback/linebacker is named The Selma Times-Journal’s football player of the year.

Edwards edged out Morgan Academy running back Holt Utsey and Dallas County linebacker Markeice Stallworth for player of the year.

The 5-foot-11 Edwards was the driving force behind Keith’s march to the Class 1A state football playoffs, accounting for over 1,700 yards of total offense and 10 touchdowns. He passed for over 1,000 yards and ran for over 700 yards. At outside linebacker, Edwards made 85 total tackles and made several bone-jarring hits.

“Being named Selma Times Journal player of the year means a lot,” Edwards said. “I’ve really worked hard for it. I put in a lot of hard work.”

Edwards said he’s a different player from last year, especially becoming a leader off the field.

“I developed my passing game and I got stronger in the weight room,” Edwards said. “A lot of weight was put on my shoulders. I treated the players the same way I wanted to be treated.”

“Jared’s decision making and getting the guys ready to play improved this season,” Lumpkin said. “He wanted to get everyone involved in the success of the team and being able to say who’s not doing their assignment. Jared was being more of a voice as a geunine leader and not just talking because he thinks that’s what the coaches wanted to hear.”

“It meant a lot to lead us into the state playoffs, but I wish we could’ve gone further,” Edwards said.

Edwards said he hopes to have a shot at playing college football. Faulkner University, West Alabama and West Georgia all have shown the most interest in signing him. On the college level, Edwards said he’d like to play either wide receiver or defensive back.

Edwards set a high standard of excellence at Keith for the Bears’ next starting quarterback to follow.