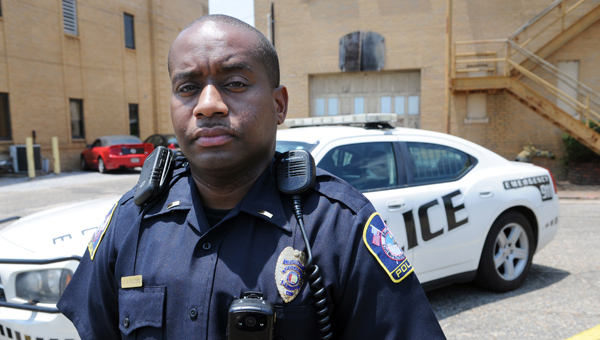 Lt. Kenta Fulford, a patrol unit shift commander, poses for a photo outside a patrol car. More patrol officers will be working during the holiday weekend to ensure everyone's safety.

Though he doesn’t officially take the reins as Chief of the Selma Police Department (SPD) until January, Kenta Fulford is already mapping out his plans  for the department and the community.

Fulford was named Chief earlier this week by the Selma City Council after a long search process that included interviews with six candidates, which were then culled down to three finalists before Fulford was chosen.

The Selma native’s appointment comes at a time when the city is getting tough on crime through the “Weed and Seed” program and represents yet another change for a department that has seen more than its share this year.

Fulford’s appointment makes him the fourth chief to oversee the department this year – former SPD Chief Spencer Collier retired earlier this year and was replaced by Interim Chief Robert Green; Green departed at the end of November and the council appointed Capt. Johnny King to oversee the department until a permanent replacement could be chosen – in January, Fulford will officially become that permanent replacement.

Fulford, who has been with the SPD since 2002, said he knew he wanted to work in law enforcement but never gave much thought to how far he wanted to go in the field.

“The more I did it, the more I loved to do it, because I love Selma and the people of Selma,” Fulford said. “Why settle for second when first is available?”

While Fulford wasn’t taken by surprise by the council’s decision Tuesday, he was overcome with emotion.

“It was quite overwhelming,” Fulford said. I had a bunch of different emotions at the same time – excitement, nervousness, happiness and worry.”

But the 17-year veteran is already making plans for his tenure as chief, saying that the biggest change will be going from the field to the office.

“I’ve been in patrol most of my career,” Fulford said. “So, I’m going to have to get used to being inside the building rather than outside dealing with the public like I am now.”

Even in that change, Fulford sees an opportunity to tackle some of his primary goals as chief.

“I see it as an opportunity to invest more in the officers now,” Fulford said, noting that such an investment will ensure that officers are ready to take ownership of the department when supervisors begin retiring.

Fulford’s top priorities – community policing and recruitment – are not mutually exclusive, as he believes one plays into the other.

“Our officers are our biggest recruiters,” Fulford said. “So the way they interact with the community will be a big thing.”

Fulford’s plans to bolster local force numbers include an advertising campaign and the creation of a mobile recruitment unit, similar to those he saw employed by the Army over his 23 years in the service.

“I think we can bring that idea to the police department because we are a paramilitary organization,” Fulford said.

In terms of community policing, Fulford said he would like to get the department’s numbers to a point where it can reinstate a bike patrol.

“It’s not like riding in a vehicle,” Fulford said. When you’re on a bike, you can ride through these neighborhoods and stop and talk to the people sitting on their front porches.”

Further, Fulford said he would like to establish a mobile trailer, similar to a unit the department had under former Mayor James Perkins, which visited various neighborhoods to offer needed services, such as social work and healthcare.

“If we could bring that back, I think that would help with community policing also,” Fulford said.

In Fulford’s mind, however, community policing and recruitment are two sides of the same coin – on one hand, more officers would make it possible to launch a bike patrol and a mobile assistance unit; on the other hand, being seen in the community can be an effective tool for recruiting local youngsters to the force.

Once those officers are recruited, they have to be retained and Fulford has plans for that as well.

But it’s not all recruitment and relationship building, Fulford also has a vision for how to improve the department’s effectiveness through technology and targeted work.

As far as technology is concerned, Fulford would like to see the department begin using a system where calls are sent directly to officers’ on the beat so that people listening to police scanners wouldn’t know about the department’s moves until they were on the scene.

Additionally, Fulford noted that the department is currently working off of grants that target hotspots in the area, a method he believes to be effective.

“My philosophy is if you arrest the right people, the city will get quiet,” Fulford said, adding that substance abuse and violence are often two problems that feed into one another. “When you abuse drugs and alcohol and things of that nature, that causes crime.”

And while Fulford has a head full of plans for the department he is set to begin leading next year, he said the most important thing is ensuring that Selma is safe.

“It’s not about me,” Fulford said. “It’s about a safer Selma. When I retire, I want to retire here in Selma and know that it’s in good hands.”