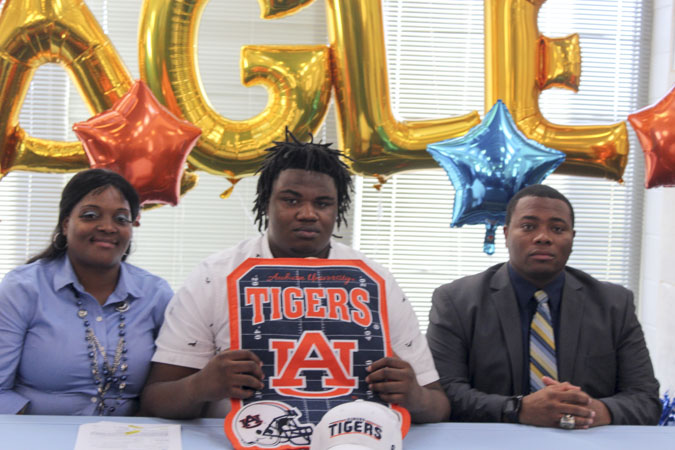 Wright signed a national letter of intent with the Tigers on day one of the NCAA Fall Signing Period.

Tennessee, South Alabama, Georgia Tech, Troy and Tulane were among the Football Bowl Subdivision (FBS) schools that offered Wright scholarships, but a visit to the Plains on July 28 ended the suspense.

“I felt that Auburn was the place for me,” Wright said. “It felt like home. I talked with my mother, grandmother and other family members about it.”

At 6-foot-5 and 320 pounds, Wright could play immediately as a true freshman next year.

“I’m excited and ready to go play at Auburn right now,” Wright said. “I have to work hard, get in shape and outwork everyone when I get there in May.”

Selma High coach Willie Gandy said Wright’s signing could be the start of something big for the Saints football program.

“I’m excited and I’m very happy for Jeremiah,” Gandy said. “I’m proud of him. The sky’s the limit for Jeremiah. He still has some improvement to make. But he’s improved since I became the coach. It’s the little things that coaches notice where Jeremiah has improved.”