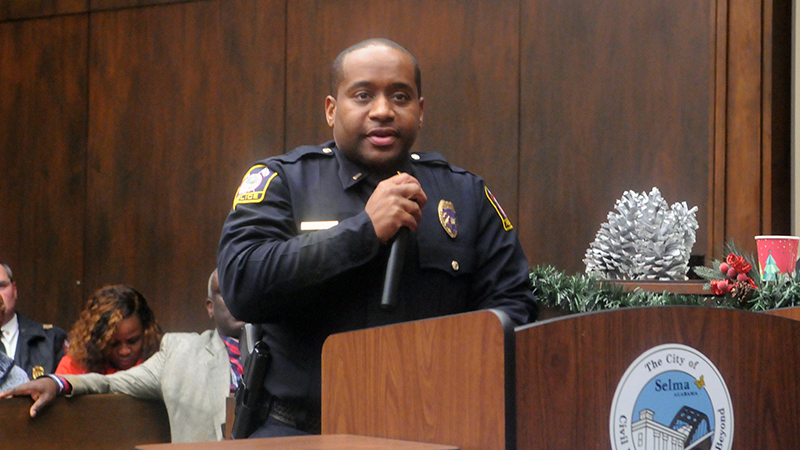 The Selma City Council met Tuesday for a work session at 3 p.m. and moved directly into a regularly scheduled meeting, in which the council voted to name Kenta Fulford the next chief of the Selma Police Department (SPD).

Fulford, who has worked with the SPD for 17 years, beat out former Butler County Sheriff Kenneth Harden and Alabama Board of Pardons and Paroles Probation and Parole Manager Stephanie Stewart for the position.

“I feel like this candidate will bring unity in the PD,” Benjamin said. “We need that.”

After Benjamin’s motion and a second from Selma City Councilwoman Susan Youngblood, Selma City Councilman John Leashore took exception with the process, saying that all three finalists were meant to appear before the council and adding that it is an “injustice” that they were not given that opportunity.

“We put a lot of thought into this,” Thomas said. “We focused on this.”

“Every single council member could have done, should have done, their due diligence,” Youngblood said, noting that she talked to a number of people and all gave a “resounding” voice of support for Fulford. “In Selma, Alabama right now, we need someone who knows the people and who the police come and say, ‘Yeah, that’s the person we want.’”

Leashore persisted, noting that he had claimed previously that “the fix was in” to appoint Fulford.

“If I was a candidate, I would feel slighted,” Leashore said, claiming that Stewart stood “head and shoulders” above the other candidates.

In the end, Fulford was approved with eight votes in the affirmative – Leashore voted for Stewart, despite the fact that the motion was to approve Fulford.

After thanking his supporters, Fulford briefly addressed the audience.

“This is not about me,” Fulford said. “This is about the City of Selma and making it safer.”